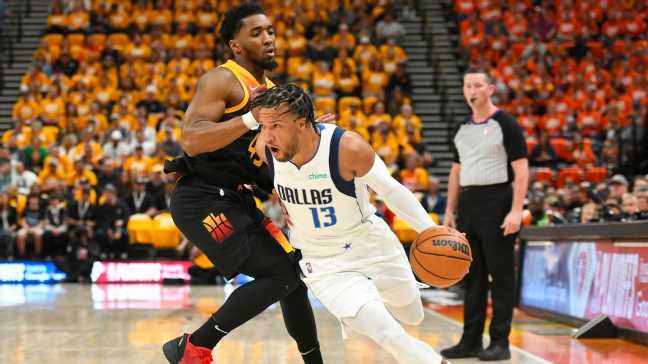 SALT LAKE CITY — Dallas Mavericks guard Jalen Brunson barked a few choice words at a referee, earning only the second technical foul of his NBA career, as he rubbed his lower back and gingerly walked toward the locker room.

Utah Jazz forward Royce O’Neale had just delivered a running elbow to Brunson’s back as players positioned themselves for a rebound, forcing Brunson to exit Thursday’s Game 3 for the final 4 minutes and 38 seconds of the first half.

That’s about the only way the Jazz have managed to slow down Brunson over the past couple of games.

The Mavs seized a 2-1 series lead with a 126-118 win in large part because Brunson delivered his second consecutive spectacular performance while Mavs superstar point guard Luka Doncic recovers from his left calf strain. Doncic has been ramping up his basketball activity and hopes to make his series debut in Saturday’s Game 4.

Brunson had 31 points on 12-of-22 shooting. That came on the heels of a career-high 41 points on 15-of-25 shooting in Monday’s Game 2 win. It’s the first time Brunson, a four-year veteran, has scored 30 or more points in consecutive games in his NBA career.

“It’s just me being myself, just trying to help my team win,” said Brunson, who also had five assists Thursday. “That’s all I’m thinking about now. I’m not really thinking about it as a coming-out party.”

Brunson, the Mavs’ second-leading scorer with 16.3 points per game, has starred in the series as Dallas’ primary ballhandler with Doncic sidelined. He has consistently exploited the Jazz’s shoddy on-ball defense, often serving as a catalyst for ball movement that has been a critical element in the Mavs making 40 3s in their two victories, including 18-of-42 shooting from long range in Game 3.

All 31 of Brunson’s points in Game 3 came off the dribble, according to ESPN Stats & Information research. He scored 22 points in the paint, using a blend of ballhandling, footwork, power and touch to torch the Jazz.

“He’s a talented player,” Jazz guard Donovan Mitchell said. “And he’s a winner. You’re seeing that. Pretty much for the first time in his career, people are really seeing it.”

Mitchell scored 28 of his game-high 32 points in the second half, when the Jazz slashed a 17-point deficit to one before falling short.

“We’re playing at such a level that we’re able to withstand their runs,” said Brunson, who has committed only one turnover in the past two games. “The fact we were able to do that tonight is special, because obviously this is a hard place to play. We’ve just got to continue to play our style of basketball and stick together. I think that we did that. Even when they cut it to one, we were still poised. We were still calm and collected. We’ve just got to keep that up.”

Utah played a significant stretch of the second half with 6-foot-6 Eric Paschall at center, scrambling for solutions.

The Jazz have been outscored by 26 with All-Star center Rudy Gobert on the floor in the past two games. The Mavs have had success playing a five-out offensive style, in large part because backup center Maxi Kleber has snapped out of his late-season shooting slump, going 12-of-16 from 3-point range. Kleber had 17 points in 22 minutes on Thursday, when he made four of his five 3-point attempts.

The Vivint Arena crowd booed the Jazz late in the second quarter and going into halftime, frustrated by watching Utah get picked apart by Dallas without Doncic in much the same way the LA Clippers did without injured star Kawhi Leonard in last year’s playoffs.

“Everybody expects us to take care of business, and we didn’t in the first half,” Mitchell said. “We got booed. It is what it is. The team that bounced back, that shows who our character is. We’ll take that, look at the film and adjust.”

Lowe: Rating all 30 NBA teams, from the top tier to the very bottom