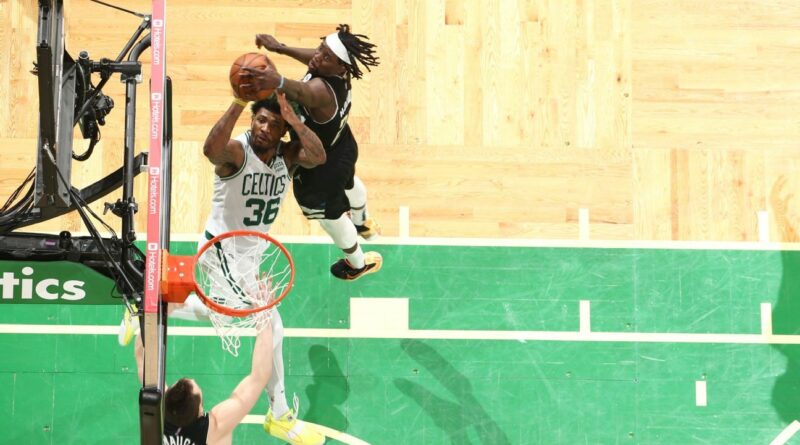 BOSTON — The Milwaukee Bucks leaned on their championship pedigree in Game 5 on Wednesday night, rallying from a 14-point fourth-quarter deficit to escape Boston with a 110-107 victory against the Celtics and take a 3-2 series lead in the Eastern Conference semifinals.

The winner of Game 5 in a best-of-seven series tied at two has gone on to win the series 82% of the time in NBA postseason history, and Milwaukee rallied to take control of the series by outscoring Boston 33-21 in the fourth quarter, including 13-6 in clutch time.

Bucks star Giannis Antetokounmpo finished with 40 points and 11 rebounds, while guard Jrue Holiday added 24 points and sealed the game with a block and steal on back-to-back possessions against Marcus Smart.

“They’re defending champs,” Smart said after the game. “They made some championship plays. And now we got to respond.”

Even though the Bucks were trailing by double digits with about 10 minutes remaining in the fourth, Holiday recalled talk in the huddle during a timeout about how there was still plenty of time for a comeback. The Bucks have relied on their experience all season to guide them through tumultuous situations — an injured player, a tough loss and now the ebbs and flows of a playoff series.

“We’ve seen 14 points [disappear] just like that,” Holiday said after Game 5. “We know it’s the playoffs, and we know it’s a great offensive team and defensive team, but we’ve also done it ourselves.

“We just always play with that confidence. That there’s going to be time left, and if we take care of business, we’ll always give ourselves a chance.”

The Celtics controlled the game and seemed on their way to closing out the win when Al Horford threw down an emphatic putback dunk with 2:12 remaining to put them up six points. It wound up being their last field goal of the game.

The Bucks outscored the Celtics 11-2 from that point on.

After Horford’s dunk, Antetokounmpo knocked down a 3-pointer on the next possession — his second of the night and only his fourth this series — to cut the deficit to three, and Holiday, who finished 9-for-24 from the field on the night, hit a wide-open trey to tie the game.

“Of course, we’re gonna be down,” Celtics coach Ime Udoka said. “Guys are going to be pissed about the outcome when we outplayed them for 3½ quarters. And so we talked showing our resolve, we made it tougher on ourselves now. It’ll make it sweeter when we bounce back. But we know we gave up a golden opportunity tonight.”

After Celtics star Jayson Tatum hit a pair of free throws, Antetokounmpo split a pair of shots at the foul line. But Smart and Tatum both tried to grab the rebound off Antetokounmpo’s miss at the same time, and the ball ricocheted into the hands of Bucks forward Bobby Portis, who put back a layup with 11.4 seconds remaining to give Milwaukee its first lead since the second quarter.

The Celtics’ final half-court possession was set up to get Tatum the ball downhill against a matchup Boston wanted, but with the play developing slowly, Smart ended up with the ball and attempted to drive toward the basket against Pat Connaughton. However, Holiday made a play to block Smart from behind, and Smart never saw him.

The Bucks hit a pair of free throws to extend the lead to three points, and Boston never got off another shot. Holiday stole the ball from Smart at midcourt on the Celtics’ final possession to seal the victory.

To fuel their comeback, the Bucks shot a perfect 6-for-6 from beyond the 3-point line in the final quarter, tied for the most such makes without a miss in the fourth quarter of a playoff game in the past 25 years, according to research by ESPN Stats & Information. The San Antonio Spurs hit all six 3s they took against the Miami Heat in the fourth quarter of the 2014 NBA Finals.

The win put Milwaukee on the verge of the Eastern Conference finals for the third time in four years. The Bucks will host Game 6 on Friday night.