LOS ANGELES — Carmelo Anthony admitted he was “shocked” that Houston Rockets teammate Chris Paul only received a two-game suspension for his role in the ugly scrap at the Staples Center.

Speaking on Sunday night, 24 hours after his colleague traded punches with Los Angeles Lakers guard Rajon Rondo, Anthony said he had feared Paul would be hit with a far stiffer sentence.

“I’m actually a little shocked at the number of games that they are missing,” Anthony said, following the Rockets’ 115-112 defeat to the Los Angeles Clippers. Lakers’ swingman Brandon Ingram was banned for four games, Rondo for three.

“It actually works in our favor to be honest with you,” he continued. “I have seen it go 10-15 games before – I was the culprit of that years ago. But to see CP – I don’t want to be speaking on CP – but to see CP only get two games … I didn’t know what to expect to be honest.

Anthony was previously referring to a brawl between the New York Knicks and the Denver Nuggets in 2006. Then with the Nuggets, Anthony was ruled out for 15 games after throwing punches as part of an ugly melee. Suspensions tended to trend more strictly in that era, coming just two seasons after the infamous Malice at the Palace incident.

Losing to the Clippers dropped Houston to 1-2, and Paul will also miss Wednesday’s home clash with the Utah Jazz. However, Anthony insisted Paul had retained a positive mindset despite the ban, which blew up when Paul furiously accused Rondo of spitting at him.

“I talked to (Chris) before the game, checking in on him to check he was good,” Anthony added. “His spirits were up, nobody wants to be suspended. I think we all know how much of a competitor he is and to be here missing this game against the Clippers after coming off a big game last night, I am sure he is disappointed. In life things happen, you got to adjust to it.” 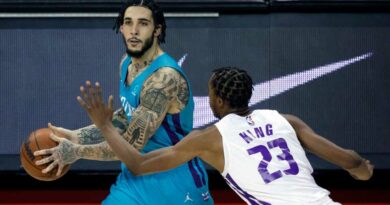