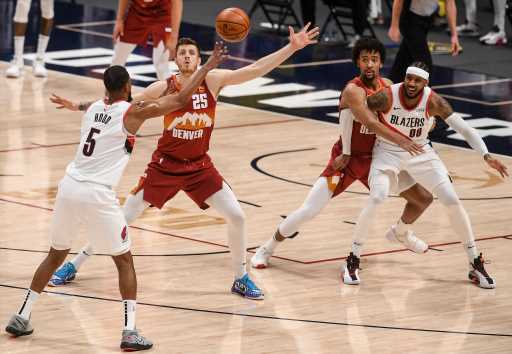 Carmelo Anthony’s had a rough run in Denver since he was traded from the Nuggets a decade ago.

The Nuggets’ No. 3 overall pick in 2003 has gone winless in the Mile High City against his former team since it traded him to the Knicks in 2011. His teams’ record when he’s played against Denver dropped to 0-9 after Portland lost, 111-106, on Tuesday night at Ball Arena. In those nine games, he averaged 19.9 points and 5.2 rebounds.

In the 18 overall games he’s faced Denver, Anthony has averaged 21.4 points — second lowest to an opponent, ahead of just the Spurs (19.2). His 2.1 assists against the Nuggets is his worst against any opposing team. He does have a decent record at home against Denver, going 6-3 against his former team.

Here’s a look at Anthony’s history against the Nuggets in the Mile High City:

March 13, 2013: Nuggets 117, Knicks 94
“He entered the night with an injured right knee and played through pain and boos. Every time he touched the basketball, the sellout crowd at the Pepsi Center booed mercilessly, for many fans felt jilted when Melo left for a bigger market.”

Nov. 29, 2013: Nuggets 97, Knicks 95
“The Knicks are as bad as you thought they were. The Knicks’ defensive effort was spotty, and their offensive execution was often stuck in quicksand as they waited for Anthony to bail them out.”

March 8, 2016: Nuggets 110, Knicks 94
“There are still scattered boos at the Pepsi Center when he touches the ball. There remains scant buzz when he is introduced to the crowd. But he’s not a huge draw in Denver, no longer a must see — even if it is just to come to the game to boo. A sparse audience Tuesday night confirmed that.”

Dec. 17, 2016: Nuggets 127, Knicks 114
“The player that closed the book on the trade, Jamal Murray, was on the court. The player that started the trade — Anthony — was out there, too. There was some question as to whether he would play because of a nagging shoulder injury. His 29 points were vintage Melo, but the Nuggets owned the night, coasting to the win.”

Nov. 9, 2017: Nuggets 102, Thunder 94
“(Coach Michael) Malone would not go as far as calling Thursday a ‘statement’ win. The coach recognizes this Thunder team is 4-7 and still finding its footing after adding Anthony and (Paul) George via offseason trades. Denver is just 12 games into the season.”

Feb. 1, 2018: Nuggets 127, Thunder 124
“(Gary) Harris’ game-winner capped the third thriller between these two division rivals so far this season, with Denver now holding a 2-1 advantage before their final meeting in Oklahoma City on March 30.”

Anthony’s line: 10 points, four rebounds and an assist in 33 minutes.

Dec. 12, 2019: Nuggets 114, Trail Blazers 99
“Now with the Blazers after stops in Oklahoma City and Houston, Anthony received a warm reception during introductions mixed with a smattering of boos. Even at 35, Anthony showed he’s still got plenty of game. He was Portland’s second-leading scorer on Thursday night, finishing with 20 points on 8 for 16 shooting from the field.”

Anthony’s line: 24 points, four rebounds, one assist and a block in 32 minutes.

Big Honey eats. Nikola Jokic poured in 41 points in Denver’s latest win — it was his fourth 40-plus-point game of the year, leading the NBA this season. It’s the first time a Nuggets player has had at least four 40-plus-point games in a year since Anthony did it in the 2009-10 season. Alex English holds the franchise record with eight during the 1985-86 campaign, followed by David Thompson (1977-78) and Michael Adams (1990-91) with six apiece.

30-30. Jokic and Murray have been shouldering the scoring load for the Nuggets of late. Over the last seven games, both players have been averaging at least 30 points — Jokic leads the way at 33.3 and Murray has added 30.1. 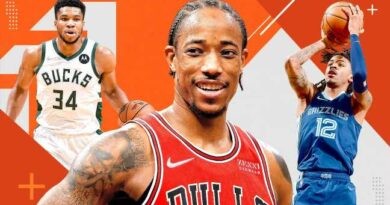 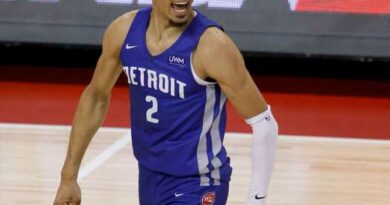