Russell Westbrook arrived at Chesapeake Energy Arena ahead of the Oklahoma City Thunder’s game against the Boston Celtics on Thursday wearing a pair of bright red overalls.

The “NBA on TNT” crew had so many jokes about the NBA star’s fashion statement.

The Inside crew reacts to Russell Westbrook’s pregame look pic.twitter.com/twYu8UGcmm

Charles Barkley was not a fan of Westbrook’s look.

Charles Barkley is not a fan of the Super Mario Westbrook look. #Thunder pic.twitter.com/28bYuZ8kJo

MORE: This Kawhi Leonard sequence is exactly why Raptors traded for him

The internet had plenty of jokes, too:

I love that Russell Westbrook dressed up as Super Mario with fireball power. pic.twitter.com/jhKMjSeL6F

I can’t look at Russell Westbrook without laughing when he shows up in those outfits, I would be a terrible friend of his that’s for sure ? #NBA pic.twitter.com/EM21EAkFXC 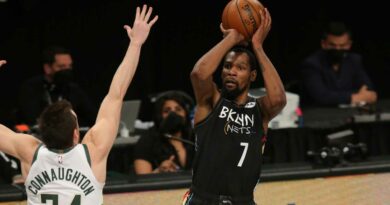