Home » NBA » C’s, Heat in statement: Must not forget injustices 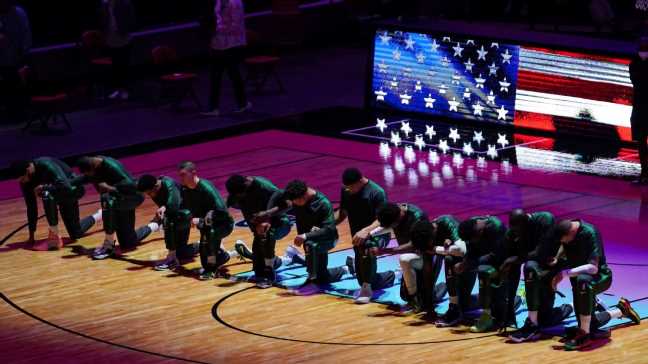 As much of the country attempted to grapple with the scenes that emerged from Washington, D.C., on Wednesday afternoon, as angry supporters of President Trump stormed the U.S. Capitol, much of the sports world was trying to figure out how to process the day’s events.

For the Miami Heat and Boston Celtics, that meant leaving the court together shortly before their game in Miami, with the two teams issuing a joint statement just prior to tipoff.

“2021 is a new year, but some things have not changed,” the statement read. “We play tonight’s game with a heavy heart after yesterday’s decision in Kenosha, and knowing that protesters in our nation’s capital are treated differently by political leaders depending on what side of certain issues they are on. The drastic difference between the way protesters this past spring and summer were treated and the encouragement given to today’s protestors who acted illegally just shows how much more work we have to do.

“We have decided to play tonight’s game to try to bring joy into people’s lives. But we must not forget the injustices in our society, and we will continue to use our voices and our platform to highlight these issues and do everything we can to work for a more equal and just America.”

The statement concluded with the hashtag “BLACKLIVESSTILLMATTER.”

Most players from both teams also took a knee during the national anthem.

It has been a tumultuous 24 hours, beginning with the decision by prosecutors on Tuesday not to file charges in the shooting of Jacob Blake, a Black man, by a white police officer in Kenosha, Wisconsin, on Aug. 23, and culminating with the violent scenes on Capitol Hill that carried into Wednesday evening.

In between, Democrats Rev. Raphael Warnock and Jon Ossoff were named the winners of the U.S. Senate runoffs in Georgia.

Celtics coach Brad Stevens said he and his players had talked about the decision in the Blake case Wednesday morning, but that he hadn’t had a chance to talk to them after everything that took place in Washington during the afternoon.

“I watched it all,” Stevens said. “I’m sure our players watched it all. I’m sure everybody’s watched it all. I guess my reaction is sad. I guess the way that I look at it is, I think we all hope that the people we elect to lead us are supposed to be modeling leadership, will do so in a way that is motivated by serving others, by showing compassion, by acting gracefully. And, instead, we elected a president … and others, that have not shown that kind of grace.

With Washington under curfew from 6 p.m. ET Wednesday until 6 a.m. Thursday, the George Washington men’s basketball game against UMass set for Wednesday night was postponed.

National Basketball Players Association executive director Michele Roberts told ESPN’s Adrian Wojarnowski there had been no conversations with the NBA about postponing any of the 11 games scheduled for Wednesday night. The Washington Wizards played the 76ers in Philadelphia.

And NFL spokesman Brian McCathy said there has been no change to the status of this weekend’s wild-card game between the Tampa Bay Buccaneers and the Washington Football Team in Landover, Maryland.

Around the NBA, however, it was an emotional day, as the league tried to grapple with the swirling emotions from the Blake decision, the Senate victories and the storming of the Capitol.

For 76ers coach Doc Rivers, who was part of many discussions about how the league could use its platform in the Orlando bubble during the NBA restart, it was a moment to remember those efforts have not been in vain.

“But what’s it not … is an attack on democracy,” Rivers said, adding, “Democracy will prevail. It always does.”

Rivers did draw a contrast between how the Black Lives Matter protests over the summer in Washington, D.C., were handled, with “the police and the national guard and the army,” and how the pro-Trump mob was dealt with on Wednesday — “no police dogs turned on people, no billy cubs hitting people. People peacefully being escorted out of the Capitol. So it shows you can peacefully disperse a crowd.”

“It basically proves a point about a privileged life in a lot of ways,” Rivers said. “I will say it, because I don’t think a lot of people want to: Can you imagine today, if those were all Black people storming the capitol, and what would have happened? That, to me, is a picture that’s worth a thousand words for all of us to see, and probably something for us to reckon with again.”

Few places, meanwhile, felt the emotions of the past 24 hours more than Atlanta, where Warnock became the first Black man elected to the Senate by the state of Georgia.

But for Lloyd Pierce, the coach of the Atlanta Hawks who has been at the forefront of the organization’s push to get out the vote both in the general election in November and the special election that just took place, what he saw Wednesday wasn’t unexpected.

“It’s tragic,” Pierce said. “I think it’s sad, honestly. I think it’s a sad reality … It’s unfortunate this is what we’re looking at in our country after the year we’ve been through. But it’s not unexpected. On a day for someone like me, an African-American man, to … see someone like Raphael Warnock become the first African-American man representing the state of Georgia going to the Senate, and you see the following day this is the reaction, this is the reality.”

Pierce echoed Rivers in noting the discrepancy in how the Trump supporters who stormed the Capitol were treated by local authorities, and those who protested peacefully over the summer.

“There’s a reason why there isn’t shootings and brutality and looting and things of that nature, and people are just walking around the Capitol Building as if it’s nothing. And people sitting in (Speaker of the House) Nancy Pelosi’s office as if it’s nothing. We all understand that would’ve been guns ablaze and fires ablaze right now if that was Black people protesting. If that was Black people protesting on the outside — we haven’t even mentioned people getting inside and tearing up the (Capitol) building.

“But none of that’s going to change until we acknowledge there’s a huge difference in how Black people are treated with regard to law enforcement, and that just hasn’t happened. We’ve been fighting for that — there’s been protests about that, there’s a reason people have encouraged others to get out and vote to change leadership. But until you truly acknowledge there’s a difference in how Black people are treated in this country, especially with regard to law enforcement, in situations like this, that’s not going to change.”

And, amid it all, players and coaches were trying to figure out how to remain focused on the task at hand while taking in everything that was happening around them.

“There’s so many layers to it,” Houston Rockets coach Stephen Silas said. “There’s what’s going on at the Capitol building, and then there’s the why, and then there’s the why for that — the division and all this other stuff. There is a long history of division in our country when it comes to political party, but it seems like right now there is more of a division in just, like, humanity. That’s what I’m grappling with and struggling with right now.”

ESPN’s Tim MacMahon and Royce Young contributed to this report.

Ranking the top 30 Warriors and Raptors in the NBA Finals