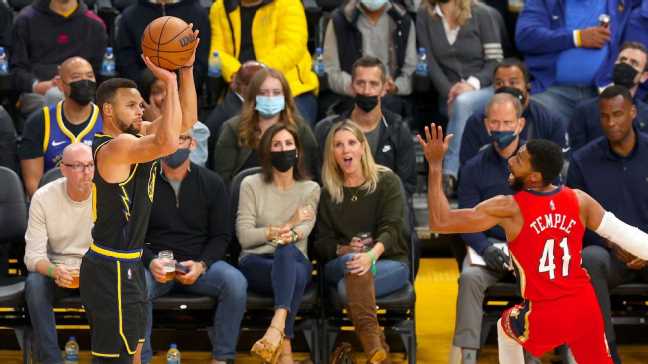 SAN FRANCISCO — The Golden State Warriors are quickly becoming the talk of the NBA after starting the season 7-1 and looking like the dominant two-way force that they proved to be during their championship reign.

After a 126-85 demolition over the New Orleans Pelicans on Friday night, star guard Stephen Curry said he isn’t surprised how fast his team has started the year.

“We got guys that understand basketball, understand how to play,” Curry said. “There’s always good intentions with what we’re trying to do even if it doesn’t necessarily work out. … We’re all trying to do the right things and understand the philosophy of how we’ve got to create shots. And then obviously defensively, our principles that we need to rely on every night.

Several of Curry’s teammates shared his sentiment on a night the team outscored the Pelicans’ bench 57-30 and shot 52.2 percent from the field. A deep and talented roster filled with a mix of veterans and young players has meshed well early in the year as the Warriors continue to take advantage of an eight-game homestand early in the year.

“I’ve seen a lot, played for a lot of different coaches. I’ve been in a lot of different environments,” veteran swingman Andre Iguodala said. “Just take a look around the league, see how teams are set up, see how they’re playing, see how the game’s being played. You can kind of size yourself up with other teams. We got two starters who are out [Klay Thompson and James Wiseman], so we got an opportunity to do something special, but we got to continue to try and get better every single day and find our weaknesses before other teams do.”

The Warriors’ start is particularly intriguing because they are doing it without Thompson, who is still rehabbing from an ACL and Achilles injury, and Wiseman, who is recovering from a meniscus injury.

While both players are expected back in the coming weeks, it’s clear that the Warriors’ new group — surrounding Curry and veteran stalwart Draymond Green — has found a strong early rhythm. Warriors coach Steve Kerr specifically pointed out veteran Nemanja Bjelica, who had 13 points and finished with a game-high plus/minus of 33 in Friday’s win, as an example of how well everything is clicking.

“Everybody is loving playing together,” Kerr said. “Belli, you can see how skilled he is, and the way we play he becomes a focal point in the offense as a passer a lot, not just as a pick-and-pop shooter. And he loves to pass, he loves to play-make. He grew up doing that, and you can see how skilled he is, so when you have a bunch of guys who can all do that and the ball moves, that’s the most fun way to play basketball. So they’re all having fun. The coaches are, too.”

Green summed up those feelings well throughout the night, especially after a monster dunk by Gary Payton II that left the veteran forward jumping up and down off the bench and celebrating on the floor.

When asked before Friday’s game whether he was enjoying the league seeming to take notice of the Warriors again, Green brushed off the praise.

“I do think this team is getting better. I think we have a ton of things we can improve upon. And I think if we can improve upon those things then we become a more dangerous team, but what are we 6-1, 7-1? We still have a bunch of games left. We got to keep getting better and embracing the process. … I think it’s all about the continued growth, and if we can continue to grow, I think the sky’s the limit.”

76ers victim of Heat’s zone in first loss at home

Charlotte’s Kemba Walker perfect host for 2019 NBA All-Star Game, but for how much longer?