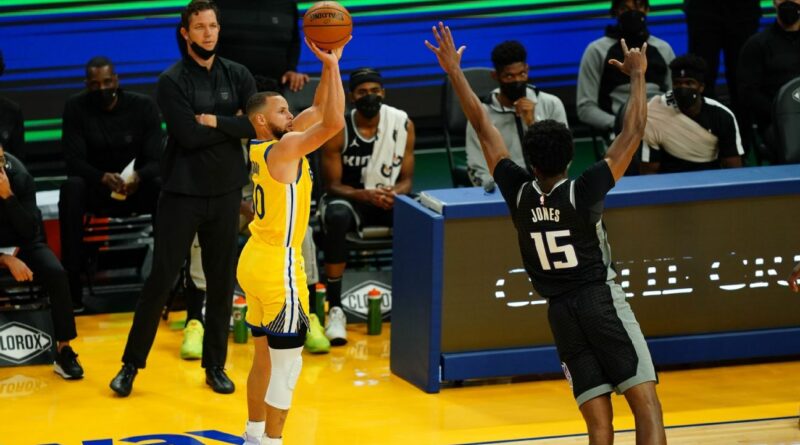 SAN FRANCISCO — Stephen Curry’s record-setting month of April rolled on Sunday night against the Sacramento Kings, as Curry hit seven 3-pointers in a 117-113 Golden State Warriors victory to set a new NBA record for most 3s in a calendar month with 85 — and counting.

The previous record was held by the Brooklyn Nets’ James Harden, who hit 82 in November 2019 while a member of the Houston Rockets.

For Curry, who is averaging 38.2 points a game this month, the shots are falling easier than ever in part because his mind is at ease.

Asked what is going through his head when he is on this type of shooting streak, Curry replied: “When you’re in this type of rhythm, nothing.”

“It’s the best way to explain it,” he continued. “It’s just trying to get a decent look, get your feet underneath you, and then the rest is muscle memory, confidence and just creativity, so just trying to be in the moment as much as possible. When you’re missing, that’s when you start thinking about mechanics, you start thinking about other stuff, those thoughts creep in your head. But when you’re in a flow, in rhythm, there is not much going on upstairs. It’s nice.”

Curry’s ability to hit shots from all over has not only lifted the Warriors to seven wins in their past nine games, it has also elevated his teammates’ level of play to its highest collective point of the season. As longtime teammate Draymond Green acknowledged, Curry’s streak makes his teammates want to play even better to complement their star.

“If it doesn’t, you should probably hang them up,” Green said. “Because you’re probably a little soft and it probably don’t matter enough to you. And in order to win in this league, it has to matter. So when you got a guy playing like that, you owe it to him to give it everything that you got in order to help win these basketball games.”

Curry’s month of April has already included two major milestones. The first came on April 12, when he passed Wilt Chamberlain to become the Warriors’ all-time leading scorer. The second came during a stretch from March 29 to April 19, when Curry became the first player in NBA history age 33 or older to score 30 or more points in 11 straight games — passing Los Angeles Lakers legend Kobe Bryant, who scored at least 30 in 10 straight games in December 2012.

Curry’s consistency has repeatedly left his teammates and coaches in awe.

“It seems like I’ve run out of ways to describe Steph’s play,” Warriors coach Steve Kerr said. “I’m just going to stop trying. I’ll ask you to go back three or four games ago, look at my comments then and use those tonight again … I don’t know what else to say. The shot-making is just unbelievable and mind-boggling, but I’ve used those phrases already. But I know you got to keep asking — as long as he keeps playing like that, you got to keep asking, I got to keep answering.”

Green knows how impressive Curry’s recent stretch has been, but what is even more impressive to him is how Curry has lifted up everybody else around him. For the second straight game, fans inside Chase Center showered Curry with “MVP” chants.

“Incredible, man,” Green said of Curry’s run. “The rim is about the size of an ocean, literally. A couple of those ones he hit tonight, it’s incredible. The way he’s leading us, it’s been incredible to watch. His scoring is just a byproduct of that — the leadership, the demeanor that he’s taking on the floor each and every night to give guys, the example that he’s setting.”

Curry finished with 37 points against the Kings. He is shooting 52.9% from the field in April and a robust 47% from beyond the arc.

“The best part about what we get to do is you don’t focus on results, you focus on the process,” Curry said. “And that, for me, is how this happens. And it doesn’t make me get bigheaded and thinking I’m the world’s greatest in terms of I can’t get better. But it makes me fall in love with the process even more and keep doubling down on what goes into trying to perfect your craft and put the work in and find new ways to get better.”

Rest assured, though: Curry believes he is the world’s greatest shooter — but he doesn’t want the extra attention from the run that he is on to deviate from the work and the mindset that brought him to this point in his career.

“Obviously, when I’m out there, I feel like the best shooter in the world,” Curry said. “It still means I still got to put the work in.”