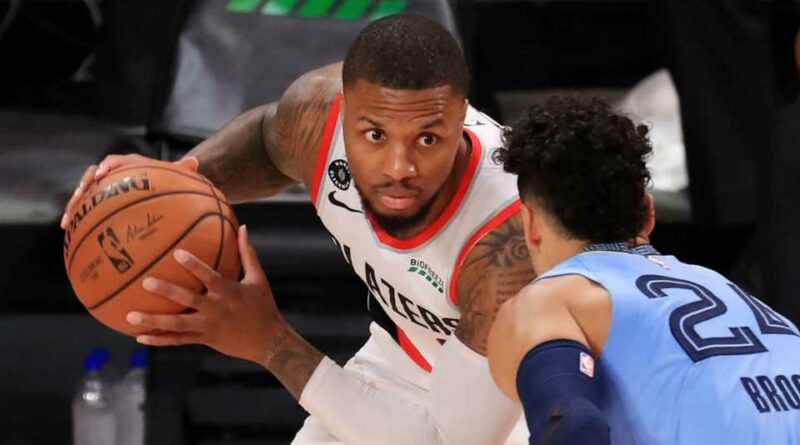 We’ve seen a Steph Curry-Damian Lillard backcourt during NBA All-Star Games before. Now, it appears that the Warriors want to make that happen during the NBA regular season.

Lillard has been the subject of trade rumors this offseason. He reportedly has concerns about Portland’s ability to build a contender around him and wasn’t happy with how the Trail Blazers handled their coaching search.

If Lillard and the Blazers are heading for a split, the Warriors will be interested in acquiring him. Anthony Slater of The Athletic reported that the team has “already internally discussed” pursuing Lillard in a trade.

Would the Warriors get involved? Yes. They’d make a call and have already internally discussed the idea, as I’m sure most contenders have, considering the rising smoke out of Portland.

Many other teams would be interested in Lillard’s services if he does come available. The Knicks, Lakers, 76ers and Heat are just a handful of potential options.

But the Warriors may be uniquely positioned to make a competitive offer for Lillard without trading one of their stars, thanks to their abundance of draft capital and the contract of Andrew Wiggins.

Their theoretical offer would be competitive. If the Blazers decided to trade Lillard, a complete rebuild seems like the wisest path and there aren’t many better rebuilding trade packages dangling out there right now than James Wiseman, the seventh and 14th pick in the upcoming draft, plus more future firsts, attached to Andrew Wiggins as salary match filler. The Thunder and other teams may have a more appealing basket of picks, but why would they spend them on a star on the wrong side of 30?

Wiggins is coming off a season that saw him shoot 47.7 percent from the field and 38 percent from 3-point range. Both numbers were career highs. His contract — which has about $65 million left over two seasons — isn’t favorable, but it could be enticing enough for the Trail Blazers if they decide to part with Lillard and go full rebuild.

After all, Wiggins is still just 26 years old and has averaged 19.5 points per game through eight seasons. Portland may be willing to take him on and see if he can become a valuable asset, especially if they’re getting Wiseman and high-end draft capital in any deal.

Meanwhile, the Warriors would be happy to pair Lillard with Curry and Klay Thompson. The team would have three true knockdown shooters and would be very hard to guard — provided that Thompson can return and play effectively after an Achilles injury.

Of course, the Trail Blazers would prefer to keep Lillard if they can. He is a six-time All-Star and has long been the face of the franchise in Portland. They won’t trade him unless they’re forced to, and Lillard indicated recently that he hasn’t demanded any sort of trade away from the team.

“At this point, it’s a lot of things being said, sometimes words being put in my mouth, and I haven’t said anything,” Lillard said. “I think, it should be all of the people who’ve covered me since I’ve been in the NBA, they know that if there’s something to be said or if I think something or have something to say, I’m going to say it and I’m going to stand on it.

For now, it doesn’t look like Lillard has requested a trade. But if the situation in Portland deteriorates, keep an eye on Golden State as one potential contenders to land him.

The stories the people closest to Kobe keep remembering