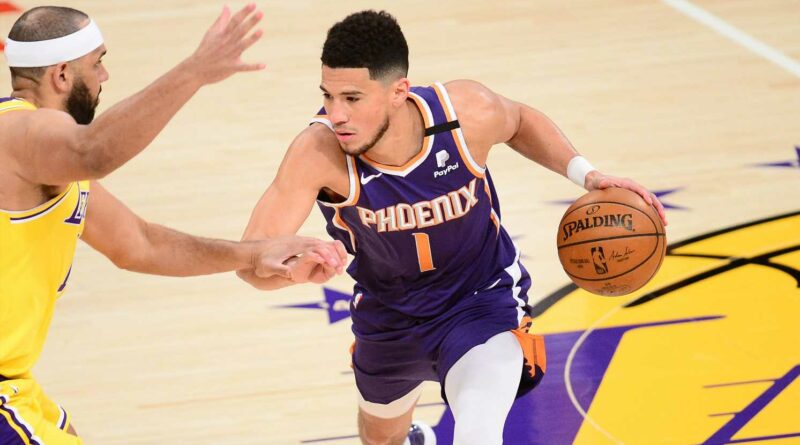 The Phoenix Suns were the hottest topic in the NBA world Tuesday night, but it wasn't for the biggest win of their breakthrough season.

Devin Booker's controversial ejection midway through the third quarter overshadowed the Suns' 114-104 win over the Los Angeles Lakers at Staples Center. Instead of a statement win over the defending champs being the center of attention, the spotlight shined on Booker and the officials' quick whistle.

Booker was hit with two technical fouls in rapid succession with 7:10 left in the third quarter after the Suns were called for a shooting foul against LeBron James. Booker appeared to say something to referee Tyler Ford, who called the first technical. A moment later, referee Justin Van Duyne assessed the second technical and ejected Booker, who left the court in disbelief.

After the game, crew chief Marc Davis told a pool reporter that Booker's first technical was for "continuous complaining" and the second was for "directing profane language at a game official."

Suns forward Jae Crowder said he tried to get between Booker and the referees to deescalate the tense situation but was too late.

“I didn’t need one. I didn’t get (an explanation) because we had to move on.”

“I looked back and I saw him walking out and saying he’s out.”

“I tried to deescalate the situation.”

Booker's ejection marred an otherwise huge game for the Suns. They've won 15 of their last 18 to improve to 23-11 and climb percentage points ahead of the Lakers for second place in the Western Conference. Most observers expected the Suns to be a playoff contender, but they are now pushing their way into the top tier of West elites.

"That was a big-time character win," said Suns coach Monty Williams. "We got better. I think we played good tonight, but we probably got more confidence that we can pull a game out without Devin or Chris (Paul) saving the day."

Here are four more things to know today in the NBA:

Milestone for the Joker

Nikola Jokic notched his 50th career triple-double and the Denver Nuggets turned one of Tuesday's marquee games into a laugher. Jokic finished with 37 points, 11 assists and 10 rebounds as the Nuggets routed the Milwaukee Bucks 128-97. The All-Star big man continues to put up otherworldly numbers this season — 27.3 points, 11.0 rebounds, 8.6 assists, 56.9/41.7/88.5 (field goal/3-point/free-throw ) shooting splits — while keeping the Nuggets in the thick of the West playoff race.

Records his 50th triple-double on the second night of a back-to-back.

Harden back in Houston

James Harden's departure from Houston was messy, but he's excited to return Wednesday to face the Rockets for the first time since being traded to the Nets. Harden has been a seamless fit in Brooklyn, and the Nets are a title contender. The Rockets have spiraled in the opposite direction and have lost 12 in a row. Houston is permitting about 4,500 fans at home games, and Harden is hoping for a warm reception despite the acrimonious split.

The top teams in their respective conferences face off Wednesday when Utah visits Philadelphia. Sixers center Joel Embiid dominated one Defensive Player of the Year candidate his last time out, and he'd love to do the same against two-time DPOY winner Rudy Gobert, who anchors a Jazz defense with the second-best rating in the league.

Matchup of the night: Steph vs. Dame

The debate heats up on Twitter every time the Golden State Warriors and Portland Trail Blazers play: Stephen Curry vs. Damian Lillard. Two of the best point guards of their generation meet again Wednesday with their teams jockeying for position in the tight West playoff race. The matchup has produced some epic moments, including their last meeting on Jan. 3 when Curry scored a career-high 62 points.

“The best guys bring the best out in you.”

After dropping a career-high 62 PTS last night, Stephen Curry speaks to going up against another All-Star point guard in Damian Lillard. pic.twitter.com/Ves8BiUXpz