New Orlean Saints quarterback Drew Brees remains one of the most recognisable figures in the NFL .

But having been at the top of his game for nearly two decades, the 40-year-old isn’t bothered by what’s going on at other franchises.

The Saints lock horns with the Carolina Panthers on Sunday – although another NFL heavyweight will be missing.

Charismatic Panthers quarterback Cam Newton is out for the season.

In his absence, 23-year-old Kyle Allen has been deputising – albeit with limited success.

His stats don’t make for great reading. Allen is a lowly No. 30 in ESPN’s quarterback rankings after an array of erratic displays.

But when quizzed about facing Allen instead of Newton, Brees didn’t seem bothered.

“I haven't really thought about it,” he explained.

“Again, if you said Luke Kuechly, I'd say yes because that's the guy I'm staring at every time I walk up to the ball.

“I’m not staring at Cam every time I walk up to the ball.

“Being that he's on the other side and it's not like this direct kind of competition.

“I guess that is a bit unusual being that he's been the starter there since 2011. Obviously, played a lot of football for them.”

With Allen failing to step up to the mark, rumours have been building about Colin Kaepernick.

The 32-year-old is unattached having not played since the 2016.

He’s been shunned after gaining worldwide attention for kneeling on the sidelines during the American national anthem.

Kaepernick wanted to bring attention to social injustice within the USA by means of peaceful protest.

However, a comeback looks closer than ever after a high-profile public workout last weekend.

The ex-49ers star was supposed to strut his stuff at the Atlanta Falcons’ training facility.

But it was moved to a local high school at late notice after Kaepernick became embroiled in legal wrangles with the NFL. 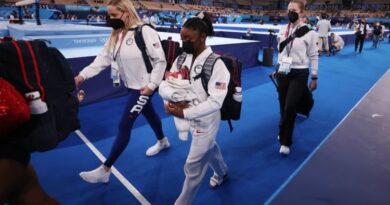 Why did Simone Biles pull out? US coach explains exactly why exit was not due to injury…