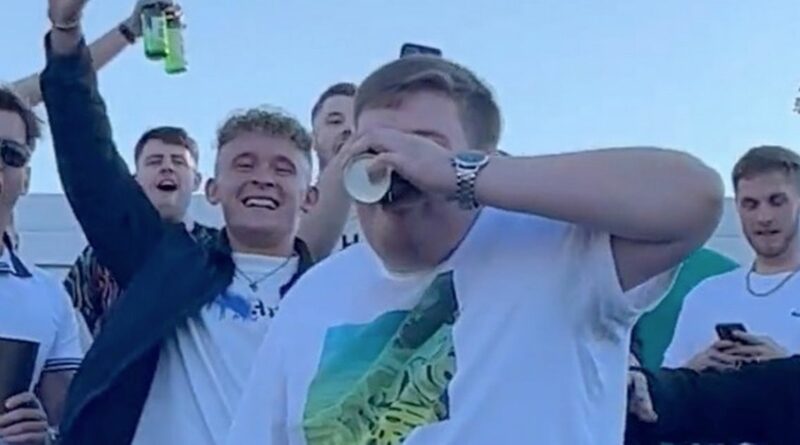 Cricket fans often get a bit of a bad rap for being nothing more than a bunch of drunken louts more interested in getting battered than watching some actual batting.

Now, we think that's a little unfair, but not when it comes to the bloke in this hilarious clip taken during Yorkshire Vikings' six-wicket victory over Durham at Headingley on Friday.

A completely hammered fan – who had apparently downed seven beers in 12 minutes according to the internet – is urged to his feet for "one more pint" by the baying crowd, and compos mentis or not, he duly obliges. Though it all goes spectacularly (and brilliantly) wrong in typically British fashion.

Cheers go up as he sees off the drink but the blear-eyed boozer then tumbles forward and collapses head-first into the row in front him – leaving nothing but his builder's bum on show for the dozens of cackling fans around him.

Remarkably though, even while faceplanted he manages to keep hold of his beer cup. #Priorities.

"Ahh he's gone," one man is heard saying as he topples over, before paramedics arrive to lift the man out on a stretcher, as chants of "Yorkshire, Yorkshire" ring out.

How many pints do you think you could neck in 12 minutes? Let us know in the comments section.

"Best thing to happen to him was to get taken home in a ambulance because no way was he finding the train station," one fan tweeted.

"Can't believe he held onto his pint what a legend," posted another, while a third wrote: "Give this man a knighthood. Makes you proud to be English!"

Others were slightly less impressed with the footage.

"I must be getting old but this isn't even remotely funny," a concerned Twitter user said.

"I mean it is funny in a sense, I’d probably be laughing away myself if I saw this in person, but whoever his mates are should be looking after him! F*** knows how anyone could neck 8 pints in that time," he added.