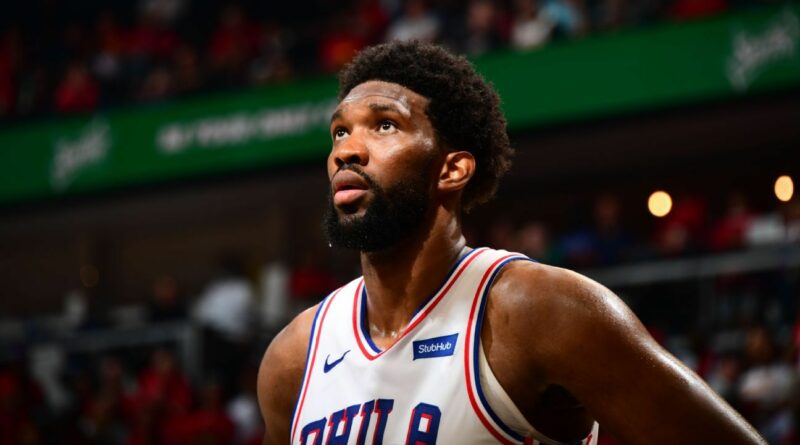 ATLANTA — Philadelphia 76ers star Joel Embiid’s second round-series against the Atlanta Hawks went from historical comparisons to the “Big Dipper,” Wilt Chamberlain, to a Big O’fer in the second half of Monday’s 103-100 loss that tied things up 2-2.

Embiid went 0-for-12 in the second half, accounting for the most attempts without a make in a playoff game in the past 25 years, according to ESPN Stats & Information research.

None of those misses was bigger than the point blank layup he couldn’t connect on with 8.8 seconds left, sailing the right-hand attempt over the rim after catching a pick-and-roll feed from Tobias Harris with Philadelphia trailing 101-100.

“Great look. Great look. I just didn’t have the lift,” said Embiid who has played this series on a partially torn meniscus in his right knee. “Thought I got fouled, too. But usually I would go up, especially for a bucket like that, try to dunk it. Try to get fouled and get an and-one. But … not being able to jump for obvious reasons. … It’s tough.”

The MVP runner-up toughed out the knee injury, suffered in the first round against the Washington Wizards, by returning to the postseason after missing just one game over six days of rest.

In the first three games of the series, he averaged 35.3 points and 10.3 rebounds per game, numbers not reached by a Sixers player over a three-game postseason span since Chamberlain in the late ’60s.

But Monday, almost from the start, was a different story. At one point in the first half, he had to retreat to the locker room for evaluation on his ailing knee.

“I guess it’s already known,” Embiid said, confirming it was the knee that was bothering him. “Don’t need to explain … I’m just trying to do the best I can.”

Even though the Sixers led by as many as 18 in the first half, their centerpiece was off. He went 0-for-4 in the first quarter, bookending his bucketless second half, and finished 4-for-21 for the game, logging 17 points.

“I thought in the beginning of the game, when I went back to the locker room, I just felt like I didn’t have it tonight,” Embiid admitted.

He was in good company with all those misses, with edging out Michael Jordan’s 0-for-11 first half in Game 4 of the 1997 Eastern Conference finals against the Miami Heat for the worst shooting playoff half in a quarter century, according ESPN Stats & Information research.

And like Jordan was apt to do, Embiid still managed to affect the game in other ways, finishing with 21 rebounds.

“He didn’t have his best night offensively, but he had some big defensive plays for us all throughout the game,” said Harris, who led Philadelphia with 20 points. So, I’m not out there critiquing his movements and how he’s looking off one leg or the other. I’m out there just trying to play basketball.

“I mean, he’s the most dominant player in the game, making shots or not making shots. We know what he brings to this team and I know he’ll bounce back next game.”

Without singling out any individual, Sixers coach Doc Rivers lit into his team during his postgame remarks.

“We went back to hero basketball. Everybody wanted to be the hero instead of just trusting the team, trusting each other,” he said. “When you do that you usually lose, especially when the other team outworks you the whole f—ing game.”

Embiid looked ahead to Wednesday, with the series now down to a best-of-three scenario.

“That was a blown opportunity. But it happened,” he said. “Can’t change it. Got to move on to Game 5.”