The NBA ushered in a new era when Adam Silver took over for David Stern as commissioner in 2014.

During a recent interview with Sports Illustrated, Stern looked back at his time as the NBA commissioner and remembered a few trades that came across his desk over the years. He talked about a time in which he vetoed a trade centered around Chris Paul between the then-New Orleans Hornets and Los Angeles Lakers and proceeded to call Dell Demps “a lousy general manager.”

“[Demps] had agreed to [trade Paul to the Lakers for] Kevin Martin and Luis Scola or something, and I said we can do better than that,” Stern told Chris Ballard of SI. “And the next trade was [to the Clippers for] Eric Gordon and Al-Farouq Aminu and what we thought was a really great draft pick, the 10th pick, which turned out to be Austin Rivers. At least those three and someone else [center Chris Kaman]. But Dell Demps is a lousy general manager and none of those players are currently with the team anymore, and he may lose Anthony Davis.”

Demps has been the president and general manager for the New Orleans Hornets/Pelicans since 2010 and made several trades over the years. Stern is, of course, referring to the infamous Paul trade to the Lakers that never ended up coming to fruition after Stern nullified the trade because the NBA actually owned the Hornets at the time.

After the trade fell through with the Lakers, the Los Angeles Clippers entered the trade talks and ended up sending Eric Gordon, Chris Kaman, Al-Farouq Aminu and a first-round pick in 2012 (which turned into Austin Rivers) to the Hornets in exchange for Paul and two second-round picks. Of course, it would’ve been interesting to see Paul playing alongside Kobe Bryant in the final years of his NBA career, but Stern was protecting New Orleans’ best interests.

“I did it because I was protecting the then Hornets,” Stern added. “To this day everyone always asks me, ‘Well why did you keep Chris Paul from going to the Lakers?’ I didn’t keep him. I didn’t approve the trade. No team sells or trades a future Hall of Famer without the owner signing off, and I was the owner’s rep. But I wasn’t going to hand up Dell Demps.”

Stern’s criticism of Demps in the present day is centered around potentially losing Anthony Davis. Davis is eligible for a supermax contract extension following the 2018-19 season and it’s been widely speculated that Demps and the Pelicans could explore trade offers for Davis if he doesn’t want to re-sign with the team.

Davis could certainly be gearing up to leave the Pelicans or at least land that big contract that he covets. Over the summer, Davis signed with agent Rich Paul, who represents several prominent NBA players including LeBron James, Ben Simmons and John Wall.

Time will tell if Stern is actually right in thinking that there’s a chance that Davis leaves New Orleans. However, it’s definitely clear what he thinks of Demps as a general manager. 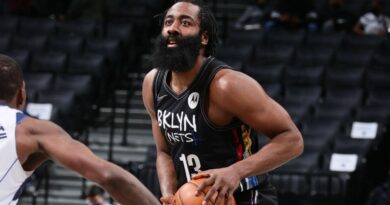 Harden back for Nets, but Big 3 missing Kyrie

For referee officiating his first NBA Finals, the assignment is a ‘heart-racing moment’