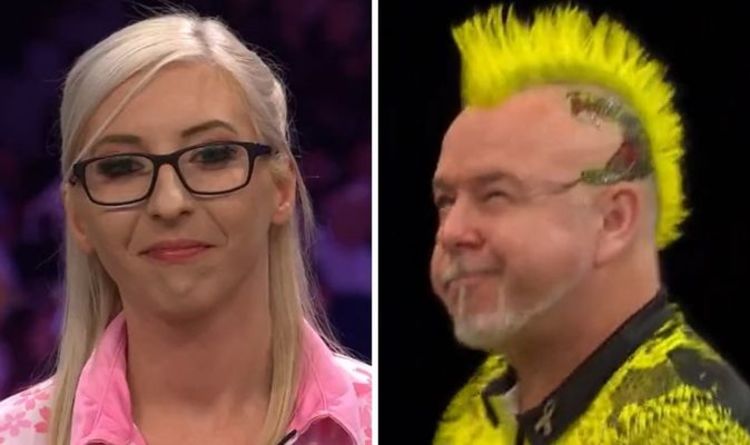 Fallon Sherrock loses out to world two Peter Wright to progress to the Grand Slam of Darts semi-finals. The 27-year-old’s dream came to an end at the hands of the World Matchplay Champion by a score of 16-13.

Sherrock got off to a lightning start, as she broke Wright’s throw to go 2-0 up.

However, she missed a glorious chance to go 4-1 up after failing to take out 96, and Wright did not need a second invitation as he pounced to reduce the deficit, before levelling the match at 3-3.

Sherrock missed another chance, this time to checkout 104 by missing a crucial double, which Wright would capitalise on as he broke his opponent’s throw for the first time.

He then held his own throw to go up 5-3, before Sherrock steadied the ship somewhat as she held throw to make it 5-4 to Wright.

JUST IN: Peter Wright calls for PDC rule change ahead of Fallon Sherrock tie at Grand Slam of Darts

A superb 180 from Sherrock applied significant pressure on ‘Snakebite’, who needed three darts to successfully take out 40 and keep his nose in front.

There was almost heartbreak for Fallon as her final dart hit the rim of the bullseye and bounced out, but after the 2020 World Champion failed to take out 76, she converted her next dart to keep pressure on Wright who led 6-5.

The 14th leg saw both players feel the nerves as Wright was unsuccessful in taking out 92, leaving Sherrock with a golden chance to draw level.

However, she missed three darts at double top, resulting in a collective gasp from the crowd, and Wright needed three darts before converting 10 to go up 8-6.

Sherrock, who had been playing a superb match, began to struggle on her doubles as she missed one to take out 96 and all three when attempting to check out 16 on her next visit to the oche.

This would have a devastating impact as not only would Wright win the leg, he also secured the next and now held an 11-7 lead.

Sherrock, who is no stranger to huge checkouts, was agonisingly close to taking out 141 to make it 12-10, but after narrowly missing double 18, Wright was on hand to take advantage and make it 13-9.

Sherrock kept the pressure on as she broke Peter Wright’s throw to make 14-13, and a thrilling 28th leg saw Wright keep his composure to close out 25, leaving him just one leg away from victory.

A wonderful 115 ended sealed a win for the Scotsman and ended a truly pulsating darts match.

The pair hit an impressive 22 180s between them and three 100+ finishes combined.

Follwing the match, Wright called Sherrock “amazing” and stated she should be competing in the Premier League, while Sherrock was pleased with her performance despite the loss.

She said: “This week’s been absoutely incredible, I made the grand slam and I made a massive dent in it, I’m so proud of myself.”

Warriors’ Russell out at least 2 weeks for thumb