“I think everyone is coming at it differently, especially when you don’t know a person,” Lever, the former Nuggets point guard, said of MPJ, whose tweets last regarding the Minneapolis policemen who had Floyd in custody when he was killed drew the ire of current and former NBA players.

“And to criticize (MPJ) from a distance, fair enough,” said Lever, 59, a fixture of the Nuggets’ backcourt from 1984-90. “(You need) to be understanding of his comments, though, once you get to know him and to get to know him better and understand where he’s coming from.”

Porter Jr. came from his heart, posting on Twitter last week that the horrific death of the 46-year-old Floyd while in the custody of the Minneapolis police on May 25 was “murder,” then asking his followers to, “as hard as it is, pray (for the officers) instead of hate them … pray that God changes their hearts.”

That last sentiment was roundly criticized on social media, most notably by the Knicks’ Maurice Harkless, the 76ers’ Mike Scott and the Clippers’ Lou Williams. But assuming the NBA resumes its season as expected this summer, Lever said he would be surprised, even in a “bubble” environment, if Porter Jr.’s peers continue to hold a grudge.

“I don’t think it’s going to get to the point of hashing out his comments on the court,” Lever said. “I don’t think so. Everyone has said something they may regret and have a different opinion on. And everyone is entitled to their opinion.

“I was surprised (to see) a young player of his stature say something like that. But I think it’s a step, as far as growth for him, to be able to now carry forward with things and to get a better understanding of the past.”

The 12-year NBA veteran said he would advise MPJ, who averaged 7.5 points in 14 minutes per game as a 21-year-old rookie, to confer with his older teammates on their advice on how best to bring about change in Denver — and how his voice could advance the cause.

“Because it’s not just about sports. It’s about everything that we do.” 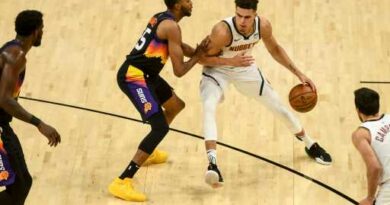