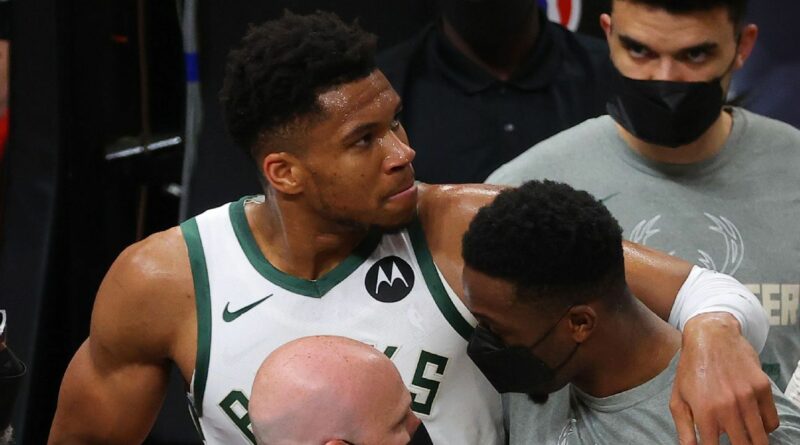 As the Milwaukee Bucks play their first NBA Finals game in nearly half a century Tuesday night against the Phoenix Suns, they do so with superstar Giannis Antetokounmpo in the starting lineup.

Antetokounmpo, who suffered a hyperextended left knee on an awkward and ugly-looking fall in Game 4 of the Eastern Conference finals a week ago against the Hawks in Atlanta, returned to action for Game 1 of the Finals in Phoenix.

Antetokounmpo was listed as doubtful for Games 5 and 6 of the East finals, and he was ruled out early in the afternoon before each of those games. On Tuesday, however, Antetokounmpo was upgraded from doubtful to questionable on the league’s initial injury report, which is released at 1:30 p.m. ET.

Then about two hours before the game, Antetokounmpo was on the court testing out his knee, going through some shooting and dribbling drills to see if it would feel good enough to go against the Suns.

During his pregame media availability, Bucks coach Mike Budenholzer declined to get into specifics about where Antetokounmpo was at in his recovery.

Antetokounmpo, 26, is averaging 28.2 points, 12.7 rebounds and 5.2 assists in 15 games this postseason, and he is coming off a third straight first-team All-NBA season and fifth straight All-Star campaign for the Bucks. The two-time league MVP signed a five-year supermax contract extension with Milwaukee in December to remain with the franchise for the foreseeable future, a move that came in the wake of the Bucks sending several future first-round picks to the New Orleans Pelicans in exchange for star guard Jrue Holiday.

Zion Williamson quiz: How much do you now know about the Pelicans rookie star?

No time to celebrate as LeBron passes Michael again