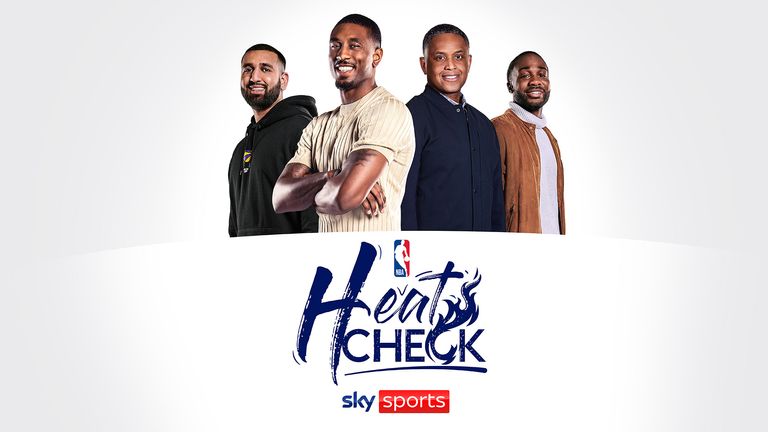 Host Jaydee Dyer is joined by three-time NBA champion BJ Armstrong, BBL legend Mike Tuck and Sky Sports analyst Mo Mooncey to discuss whether the Miami Heat will return to the Finals, the best spot for Andre Drummond and the All-Star promise of Anthony Edwards.

Roll up, roll up, it’s that time again. Filling in for Ovie Soko on this week’s episode is none other than Sheffield Sharks captain Mike Tuck, alongside the ever-present BJ Armstrong and Mo Mooncey.

The most important news from around the league is the incident concerning Meyers Leonard, who used an anti-Semitic slur whilst playing video games during a livestream. Mike, BJ and Mo share their thoughts on the player’s suspension by the NBA and whether further steps need to be taken.

In Hot Or Not the takes come thick and fast. Will Jimmy Butler do the unthinkable and lead the Miami Heat – who have won 11 of their last 12 games – back to the NBA Finals?

The debate heats up further as opinions are divided on the potential of No 1 overall pick Anthony Edwards. The Minnesota Timberwolves have the worst record in the league, but just how much responsibility rests on the play of their rookie guard?

Off The Court focuses on the eternal question every general manager tries to answer year-in and year-out: How do you build the perfect roster? From supermax contracts to salary caps, this is everything you’ll need to know should an offer to run the Sacramento Kings arrive through your mailbox.

As for LeBron James, he has made his intentions clear once his playing days are over.

As always, Jaydee wraps things up by looking ahead to two tantalising match-ups live on Sky Sports this weekend.

On Sunday, it’s a Heatcheck derby as his Orlando Magic visit Mo’s Boston Celtics, whilst Saturday sees the Atlanta Hawks head to Los Angeles to take on the Lakers.