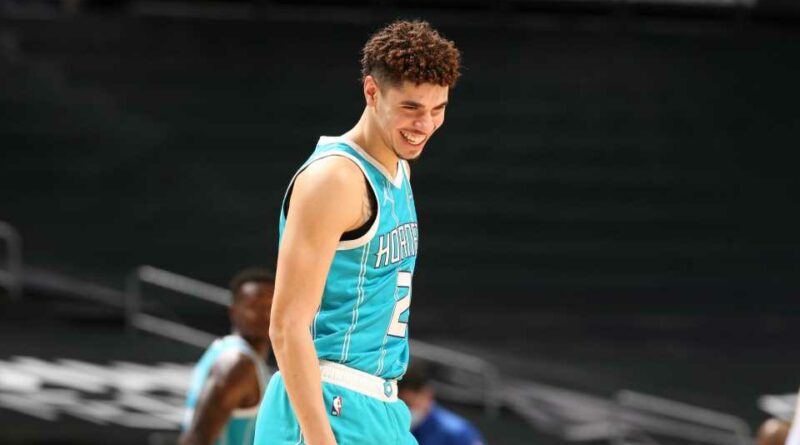 LaMelo Ball’s NBA career with the Hornets got off to a subpar start.

In fact that might just be a generous description of his NBA debut. It was downright brutal.

The third overall pick of this year’s draft played a scoreless 15 minutes in his first game, missing all five of his field-goal attempts in Charlotte’s 121-114 loss to the Cleveland Cavaliers on December 23.

Not only did he fail to score, the highly-touted playmaker also turned the ball over three times, becoming only the second player in the last 35 years to finish without a point while taking at least five shots with three or more turnovers in 15-plus minutes in their NBA debut, joining the Golden State Warriors’ Brandon Williams in 1998.

While he got off to a shaky start, things have since gone much better.

Better actually might not be kind enough in describing his recent play. He’s been outstanding.

On the onset of the 2020 draft, the 6-foot-7 point guard was widely considered to have the highest ceiling of all the prospects. An adept ball-handler, scouts marvelled at his passing, court vision and his ability to push the ball up the court.

Though Ball possesses an immense skillset and has a comprehensive understanding of the game, making the jump from Australia’s National Basketball League to the NBA would admittedly take time.

It took him all of one week.

With 22 points, eight rebounds and five assists in a win over the Dallas Mavericks on December 30, he became the first player in the last 35 years to reach those numbers in just his fourth game, and he’s continued to stuff the stat sheet with impressive numbers.

Since then, he’s had two more games with 15 or more points, eight or more rebounds and five or more assists. Only four other players have had more such games in that span – the Denver Nuggets’ Nikola Jokic (six), Mavericks’ Luka Doncic (five), New York Knicks’ Julius Randle (five) and Los Angeles Lakers’ LeBron James (four).

In the middle game of that three-match stretch, Ball made history. At 19 years and 140 days, he became the youngest player ever to record a triple-double by notching 22 points, 12 rebounds and 11 assists in Saturday’s win over the Atlanta Hawks.

Despite stumbling out of the gate with his forgettable debut, he still reached the 10-game mark with 131 points, 63 rebounds and 59 assists. In the last 35 seasons, only two other rookies have reached those numbers after 10 games – James in 2003 and Simmons in 2017.

Ball’s passing has been as advertised. He’s finding his open team-mates and setting them up for success.

Among the 100 players with at least 30 assists, he has the league’s 10-best assist rate – the estimation of percentage of field goals made by team-mates while he’s on the floor. At 36.8 per cent, Ball sits just a bit back of James, whose eighth at 37.6.

With 71 assists on the season, Ball has eight fewer assists than Devonte’ Graham for the most on the Hornets. He does, however, lead Charlotte with 84 rebounds, and if he does surpass Graham and finish the season leading the team in both rebounds and assists, he’ll join Michael Jordan in 1984-85 and Blake Griffin in 2010-11, as the only rookies in the last 40 years to lead their team in both categories.

Not only is Ball flourishing in the part of his game many thought he would eventually excel in, he is also finding success in areas that were believed to be some of his biggest weaknesses – shooting and defense.

After shooting a dreadful 24 per cent from 3-point range in Australia’s NBL, Ball is making a respectable 33.9 per cent of his 3s. Nothing outstanding, but the league average on 3s is 36.6 per cent.

He’s also showing a proficiency at knocking down shots just inside the arc. His 50 per cent shooting on mid-range jumpers is tied with seven others for 17th in the NBA among those with at least 100 field-goal attempts.

Defense was another area that many expected would take Ball time to grasp and be competent in, but he’s already proven to be up to speed, leading all rookies with 22 defensive stops.

Not surprising, but each of the previous six won the Rookie of the Year Award.

Playing at a level few rookies have before him, Ball is the early frontrunner to win this season’s award.

Good thing for him the trophy isn’t handed out after one game.

How long will it take for NBA teams to get in shape with the season restart looming?