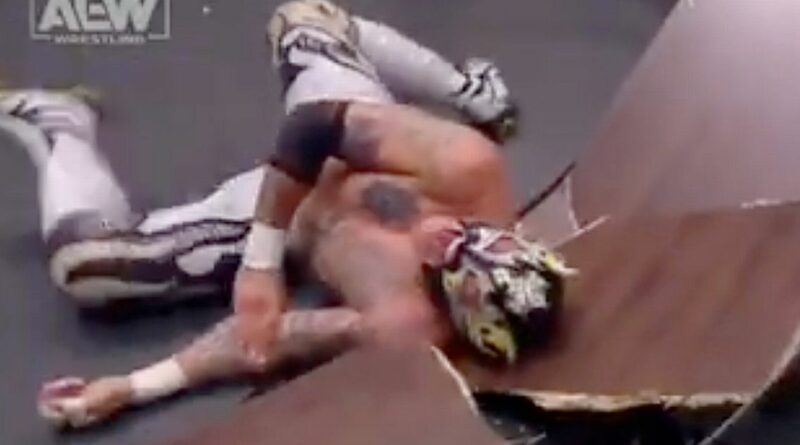 All Elite Wrestling star Rey Fenix was rushed to hospital after being thrown through a table and sustaining a horrific broken arm in a bout on Wednesday night.

The gut-wrenching injury occurred during a match between Jungle Express and The Lucha Bros, who were defending their AEW Tag Team titles.

During the closing stages of the Dynamite fight, Luchasaurus, real name Austin Matelson, picked Fenix up, threw him over the ropes and slammed him straight through a table outside the ring.

In horrific scenes, Fenix's arm got caught underneath him as he landed, leaving viewers watching through their fingers as his arm bent the other way.

Fenix grabbed his left arm immediately after hitting the table and appeared to gesture for help as he writhed around in pain.

Remarkably, the sickening injury didn't lead to the match being stopped or ending prematurely, as Penta and Jungle Boy continued on and finished the contest, with the latter claiming victory.

Has anyone ever put you through a table? Let us know in the comments section.

According to fellow wrestler and journalist Bryan Alvarez, Fenix suffered a broken arm in the collision and went straight to hospital after the fight.

However, PWInsider appeared to suggest that Fenix 'likely dislocated his elbow.'

Either way, the impact on the 31-year-old's arm looked grim, and he received plenty of support on social media after the show had finished.

While Jungle Boy, who was in the match with Fenix, added: "Wishing a speedy recovery to Ray Fenix. One of the very best in the world, and one of the greatest people. It’s always an honour to share the ring with you. Much love."

Former WWE star Matt Hardy commented: "Get well soon, @ReyFenixMx. So much love is directed towards you, mi amigo. #AEWDynamite."

She said: "Guys let me remind everyone that WE PUT OUR LIVES AND BODIES on the line for this sport. Be mindful of what we said to the performers. We love our fans and we do this because is our passion but be mindful. Today was scary. Please pray for my friend…."

What if Zion Williamson misses games?