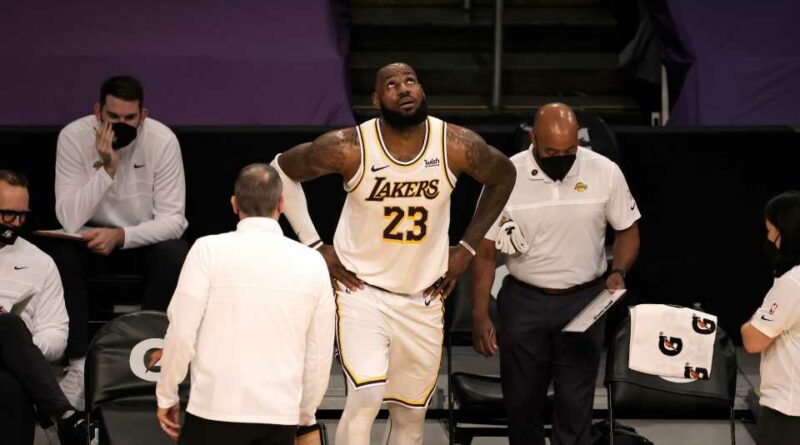 Already without the services of Anthony Davis, the Lakers are now down another All-Star forward.

LeBron James will be out indefinitely after suffering an ankle injury during a March game against the Hawks. Los Angeles may fall in the Western Conference standings with Davis and James out, but the main concern is having the dynamic duo ready for the 2021 NBA playoffs as the team chases back-to-back titles.

What’s next for James? Here’s everything we know about his injury and the latest news on when he may return to the court.

What is LeBron James’ injury?

Early in the second quarter of a March 20 game between the Lakers and Hawks, Atlanta forward Solomon Hill dove for a loose ball and collided with James. He appeared to roll up on James’ right ankle, and the four-time MVP screamed in pain as he went down to the floor.

James attempted to stay in the game and even drained a corner 3-pointer when play resumed, but the Lakers eventually called a timeout after it became clear he was struggling to move up and down the court. James then walked straight back to the locker room, knocking over a chair in frustration as he made his way down the Staples Center tunnel. He did not return, and the Lakers lost by a final score of 99-94, snapping a four-game winning streak.

The Lakers announced after the game that James had been diagnosed with a high right ankle sprain and will be out indefinitely. X-rays on James’ ankle came back negative, according to ESPN’s Adrian Wojnarowski.

“Nothing angers and saddens me more than not being available to and for my teammates!” James tweeted following the diagnosis. “I’m hurt inside and out right now. The road back from recovery begins now. Back soon like I never left.”

How long will LeBron James be out?

The short answer: It’s too early to know when James will be able to rejoin the Lakers’ starting lineup. The average missed time for a high ankle sprain over the last seven 82-game seasons has been approximately 10 games, according to injury expert Jeff Stotts. However, Stotts noted that a quicker return is possible.

From his 2018 breakdown of Klay Thompson’s high ankle sprain:

The timeline of recovery for ankle sprains widely varies based on a number of factors including the severity of damage, the involved joint and any other accompanying injury. Treatment for a high ankle sprain is the same as a normal medial or lateral ankle sprains but generally take longer to heal. A big reason for this extended recovery time is linked to the disruption of overall stability and potential widening of the ankle mortise.

Los Angeles has unsurprisingly struggled when Davis and James sit, but the Lakers aren’t nearly as concerned with their seeding as they are with having a healthy roster heading into the postseason. They will likely be extremely cautious when it comes to James’ recovery timeline.

Jordan Clarkson trade analysis: Jazz give up on Dante Exum dream to get offensive spark