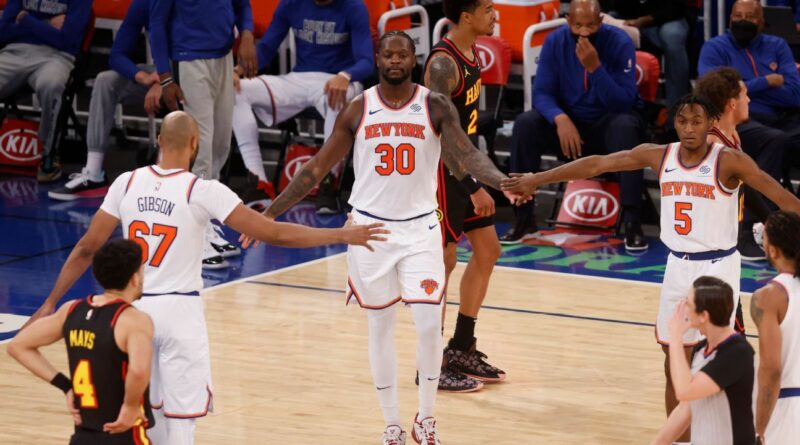 The New York Knicks won once again Monday night, getting a third straight win by beating the Atlanta Hawks behind 44 points from Julius Randle.

By scoring more than 40 points, Randle broke a streak of 183 games in which the Knicks did not have a 40-point scorer. That was the longest active streak in the NBA. The last Knicks player to score 40 or more was Trey Burke against the Charlotte Hornets in March 2018. Randle’s 44 points tops his previous high with the Knicks of 35.

After the game, teammates Theo Pinson, Immanuel Quickley and RJ Barrett surrounded Randle and declared him an All-Star. And in postgame interviews, both coach Tom Thibodeau and his teammates gave Randle a further push to be named as a reserve when the teams are announced next week.

“What else does he have to do?” Barrett asked after the game. “The man is an All-Star.”

“Absolutely,” Thibodeau said, when asked if Randle was an All-Star. “And it’s not just what he’s done statistically, but the impact on winning I think. He’s making other people better. He’s played an all-around game, strong on both sides of the ball. He’s played an unselfish game. He’s doing it in a number of different ways. He’s playing multiple positions. … He’s doing it all. But the most important thing is the impact that he’s having on winning, and hopefully it’ll be recognized. But I know there’s great appreciation by his teammates and his coaches, the organization, certainly our fans, for what he’s bringing to our team.”

Randle also talked about how much the support from his teammates means.

“It’s an amazing feeling,” Randle said. “For me, those guys trust in me and believe in me every night to go out and lead the team, is a great feeling. It’s a collective thing, what we’re doing out there, and I just try to be the best leader as possible that I can be. Just try to be a guy that they want to follow, or a guy that they trust to lead the team. For me, I just try to do everything the right way. Be a guy they can lean on and go about the game the right way.”