This year's World Athletics Championships is in full swing – and that could apply to action on and off the track.

Team GB have so far won three medals in Eugene, Oregon. But back in 2012, though, athletes were making headlines on and off the track in London, according to an anonymous member of Team GB at the Games.

He explained that the frisky behaviour increases as athletes begin to be eliminated from their events or complete in their competitions.

“In the second week, it starts getting more exciting," he revealed. "That is when a fellow Team GB athlete and I arranged to meet a couple of Ukrainian athletes from the track and field team who wanted to have a night out in London.

“I got us on the guest list at Mahiki, and the cocktails were flying. There was lots of dancing. I kissed one of the girls – a pretty blonde field athlete with big blue eyes. We invited them back to our dorms for some more fun, and ended up leaving at around 1am to go back to the Village.”

Although athletes were not supposed to bring competitors from other teams back to their dorms, the anonymous Brit explained that security would turn a blind eye if they had accreditation to enter the Village.

With the pair of Ukrainian blondes back in their dorm, he thought he would try his luck at securing a foursome, as he explained: “I thought I'd test the water, so I said to the girl I was with that I would have sex with her if she had sex with her girlfriend first.

“They seemed really keen, giggling and kissing each other. It was clear that one of them at least had done this before.

How many medals will Team GB win at the World Athletics Championship? Let us know in the comments section below.

“Before I knew it, they were kissing each other and I was kneeling on the floor between them. I don't need to give you the details, but let's just say I was having fun – and so were they. My friend from Team GB was a bit nervous, but soon joined in kissing the girl I'd been with earlier.”

A record 150,000 condoms were made available for athletes during the 2012 Games, which equated to around 15 per athlete for the 17-day event.

The anonymous Team GB man added that Usain Bolt was often surrounded by female athletes at his after parties during the games, as he claimed another three gold medals in London.

Bolt, who was infamously pictured with members of the Swedish women's handball team during the Games, got lucky four years later in Rio, according to a Brazilian student.

Having won the last three of his eight Olympic golds at his final Games, Bolt is said to have used Google Translate to tell Jady Duarte that he fancied her before they left a nightclub together.

The then 20-year-old said at the time: "It was mainly just small talk and him telling me how beautiful I was. We used Google but I didn't need a translator to tell me that he wanted sex."

The anonymous British star ranked track athletes as the most "up for it" in London, ahead of beach volleyball players and swimmers. There is no suggestion he is talking about Bolt.

“The sprinters are the worst, partly because they are well-known," he added. “But they like to go to strip clubs. Personally, I think it's sad to waste £20 on a dance with a woman you can't touch.

“Unless you're a high profile sprinter, being an Olympic athlete is not like other sports where you're a recognised face. You can't use it to get girls. I'm not the best looking guy around, nor am I the worst – but girls seem to like my accent."

It is unknown whether athletes were able to get up to as much fun at last summer's delayed Olympics in Tokyo, but with restrictions this tournament could be a return to finishing first.

NBA mock draft 2020: What will Timberwolves, Warriors do with their picks amid constant trade rumors? 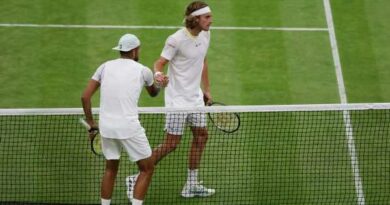