The Knicks owner told ESPN Radio on Tuesday via The Athletic, the young core will not be centerpieces moving forward, as the team has received interest from top free agents.

James Dolan says players & their agents have told Knicks they want to come to NY. Says Knicks’ young players won’t be team centerpieces next year.
“I can tell you from what we’ve heard I think we’re going to have a successful offseason when it comes to free agents.”

The Knicks traded Kristaps Porzingis to the Mavericks before this year’s trade deadline, freeing up two max slots for stars. They are rumored to be in pursuit of Kevin Durant and Kyrie Irving, who could both become unrestricted free agents after the 2018-19 season.

Kevin Knox, Mitchell Robinson, Allonzo Trier and Dennis Smith Jr. have played hefty minutes for the Knicks, but that could change if Dolan gets his way in the offseason.

New York is 13-54 and ranks last in the Eastern Conference standings. Right now, it has the best shot at winning the draft lottery and getting the No. 1 pick — presumably Duke’s Zion Williamson.

It’s unclear what Dolan plans to do with the assets his team has now, but it seems like he’s banking on a bountiful free-agent harvest for now. 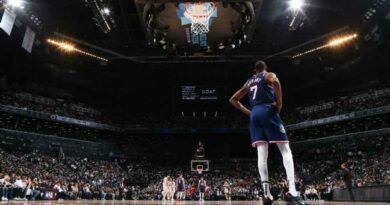 Injuries, tension and endless controversy: What derailed the Brooklyn Nets

How four months off derailed the Bucks’ run for a title