For two days the Jazz had to live with Jamal Murray nightmares, the type that leave you trailing a series despite a historic 57-point explosion by one of your own.

And Jazz coach Quin Snyder was determined to get a good night’s sleep.

Utah opened Wednesday’s Game 2 with rugged wing Royce O’Neale checking Murray instead of veteran Joe Ingles. There was no erasing the memory of Murray torching Ingles throughout Monday’s fourth quarter and overtime sessions despite the size advantage he seemingly had over him.

One loss and 36 points later, it was O’Neale’s job to bottle up Denver’s precocious point guard. In large part, the tweak worked. Murray finished with an unremarkable 14 points and four assists in 30 minutes in the Game 2 pounding.

That defensive assignment had nothing to do with the collapse of Denver’s 3-point defense, but it certainly impeded its ability to claw back.

“If you want to credit them scoring 124 points and limiting us to 105 (to that matchup) you can, but I don’t buy that,” Nuggets coach Michael Malone said sharply.

Murray had just four points at halftime, when the game was still close, and was almost a non-factor alongside Denver’s two other pillars, Nikola Jokic and Michael Porter Jr. Meanwhile, Jazz star Donovan Mitchell authored another exemplary, efficent performance with 30 points.

Murray knows it, too. His steady, self-assured postgame answers sold the idea that he wasn’t flustered by the tactic.

“(O’Neale) was just pressing,” Murray said. “We just gotta be more aggressive, we just gotta hold our spots more. (He) messed up the plays a couple times, makes it look worse.”

In the moments after Wednesday’s drubbing, Murray was already reassessing how his approach would differ in Game 3.

“Whether I’m going downhill or whether I’m taking my shot, just commit to it,” Murray said. “Sometimes I get indecisive.”

Maybe O’Neale’s physicality was more impactful than anyone knew going in, but the Nuggets thrive when Murray plays with conviction. He did in the third quarter, when he put his head down and bullied O’Neale for a team-high 10 points, though it barely registered in comparison to Utah’s 43-point flood.

If the Jazz stick with O’Neale on Murray, Wednesday’s third quarter should serve as a rough outline.

“They made some adjustments and now it’s our turn to go make ours,” Murray said.

Coronavirus: List of sports stars who have tested positive for COVID-19 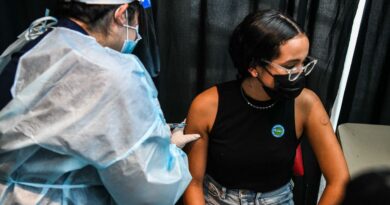 NBA team tells employees they must get vaccinated or resign