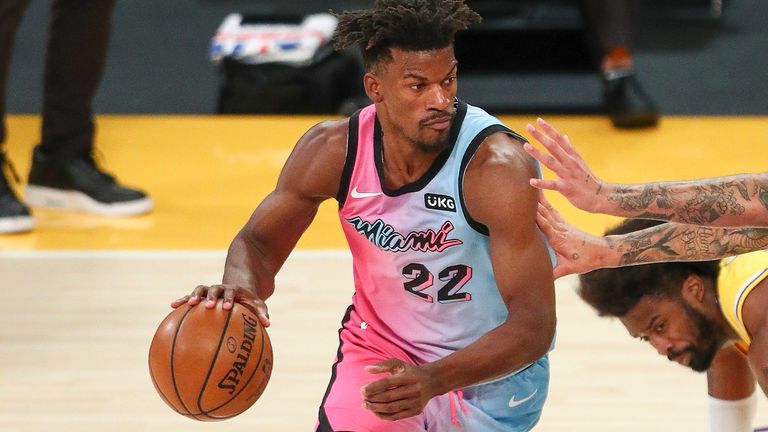 Kendrick Nunn scored 27 points and Jimmy Butler had 24 points and eight rebounds, leading the Miami Heat to a 96-94 victory over the host Los Angeles Lakers on Saturday in a rematch of last season’s NBA Finals participants.

Lakers guard Dennis Schroder missed his second straight game due to the NBA’s health and safety protocols, while All-Star forward Anthony Davis sat out his fourth consecutive game while he remains out with a right Achilles tendon injury.

Both teams struggled in the fourth quarter. They combined for only 32 points. But two free throws by Butler with 12.4 seconds left were the difference.

Minutes before, a three-point play by Kuzma allowed the Lakers to cut the Heat’s lead to 94-92 with 1:28 remaining. After Robinson was called for an offensive foul with an elbow to face of Caldwell-Pope with 25 seconds remaining, Wes Matthews misfired on a 3-point attempt with 16.6 seconds left.

After Butler’s free throws gave the Heat a four-point advantage, Matthews converted a layup to slice the gap to two with 8.4 seconds left. But Alex Caruso, who failed to score in 20 minutes, missed a 3-pointer before the final horn.

Bradley Beal recorded 37 points and seven rebounds to lead the Washington Wizards to a 118-111 victory over the host Portland Trail Blazers.

Damian Lillard scored 29 of his 35 points in the second half and had 12 assists for Portland, which saw its season-high six-game winning streak halted.

Beal and Hachimura scored baskets and Davis Bertans knocked down a 3-pointer during a 7-0 run to give Washington a 110-101 lead with 2:18 remaining.

Lillard was fouled shooting a 3-pointer and made all three with two minutes left. But Hachimura and Westbrook answered with baskets to push the lead to 114-104 with 1:09 remaining and the Wizards closed it out.

Devin Booker scored a game-high 23 points, Mikal Bridges was one of three Phoenix players to finish with 19 points and the visiting Suns routed the shorthanded Memphis Grizzlies, 128-97.

The Suns ran out to a 31-point halftime lead, holding the Grizzlies to fewer than 20 points in each of the first two quarters. The Suns’ dominant first half defensively followed a fourth quarter in Friday’s win at New Orleans in which Phoenix held the Pelicans to 12 points.

Phoenix’s lead swelled to as many 36 points in the second half as the Suns took advantage of a dismal 3-point shooting night from the Grizzlies.

Memphis went 5-of-33 from behind the arc while Phoenix hit 24-of-46. Booker’s 5-of-7 set the pace among the starters, while Bridges and Chris Paul each went 4-of-5 from outside. Paul finished with 16 points and six assists.

Dario Saric came off the bench to knock down 3-of-5 3-pointers and finish with 19 points, while Cameron Payne matched Booker’s 5-of-7 en route to 19 points. Payne also passed for a game-high seven assists.

The win marked Phoenix’s eighth in its last nine games.

Jonas Valanciunas finished with 10 points and a game-high 12 rebounds for Memphis, and Ja Morant added 12 points and five assists.

Zach LaVine scored 38 points and Coby White chipped in 19 to pace six players in double figures as the host Chicago Bulls sent the Sacramento Kings to their sixth straight defeat with a 122-114 victory.

Chicago won for the third time in four games as LaVine shined again, surpassing the 30-point plateau for the seventh time in eight games and 15th time this season. LaVine shot 15-for-20 from the floor to boost the Bulls to a 59.8 percent effort from the field.

Rookie Patrick Williams contributed 11 points and 11 rebounds for his second career double-double, while White drilled five 3-pointers as Chicago went 11-for-23 from distance.

Marvin Bagley III had a double-double of 26 points and 11 rebounds to lead the Kings in the first game of a five-game road trip. Buddy Hield followed with 23 points, and De’Aaron Fox added 20 points and nine assists.

Warmed up and ready to make his annual Charlotte homecoming, Curry was escorted back to the locker room shortly before the opening tip. The Warriors reported a few minutes later that the league’s third-leading scorer wasn’t feeling well.

Curry, who had his number retired at both Charlotte Christian High and nearby Davidson College, also missed last year’s game at Charlotte with a broken hand.

Despite Curry’s last-minute scratch, the Warriors led 100-98 and had possession of the ball after Draymond Green grabbed an offensive rebound with 15.7 seconds left.

Green handed off to Brad Wanamaker, the team’s best foul shooter in Curry’s absence, but in his attempt to run out the clock, the backup point guard got tied up by LaMelo Ball for a jump ball with 9.3 seconds left.

The taller Ball tipped the ball to a falling Gordon Hayward, who was immediately tied up by Green for another apparent jump ball. But the referees ruled that the Hornets had called a timeout after Hayward was in possession, allowing them to get the timeout and keep the ball.

Infuriated by the call, Green got two technical fouls and was ejected from the game.

Rozier made both free throws that resulted from the technicals, tying the game at 100, still with 9.3 seconds left, then buried his game-winner from just inside the arc over Juan Toscano-Anderson as the final horn was sounding.

Rozier shot 8-for-11 on 3-pointers and finished with a game-high 36 points, his fourth consecutive 30-point outing.

After ‘Tiger King’ cameo, Shaquille O’Neal says he is not friends with ‘Joe Exotic’

Beal 1st since Kobe to score 50 two nights in row