Kawhi Leonard is the first man to win the NBA All Star Game Kobe Bryant MVP award after inspiring Team LeBron to victory over Team Giannis.

The NBA All Star Game went down to the wire in the new format with Team LeBron coming out victorious with Anthony Davis landing a free-throw to win the game.

Davis may have hit the winning shot, but it was Leonard who put Team LeBron in with a chance of the win after his incredible performance.

The LA Clippers star finished with 30 points, which included an amazing eight three-pointers made.

The 2020 NBA All Star Game had a new format take over from the traditional scoring system of normal NBA games. 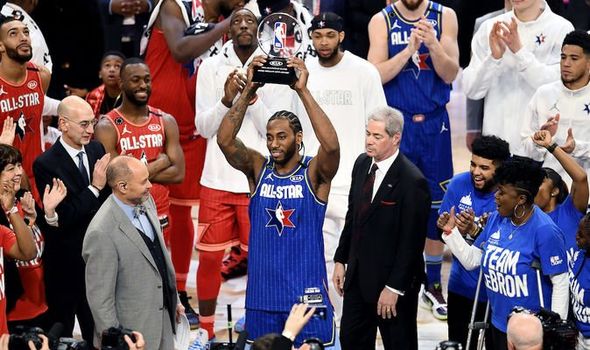 Instead, teams were competing to win each of the first three quarters with the score set at 0-0 at the start of the quarter.

Winning a quarter meant $100,000 to their chosen charities and Team LeBron got the ball rolling by taking the first quarter.

Team Giannis though levelled the scores in the second before the third ended in a tie.

It meant the fourth quarter had $300,000 up for grabs, where the game clock as turned off and a Final Target Score of 157 was set.

The new format was proving a hit with fans as the players put on a rare sight of defence being played in an All Star Game.

Fouls were being committed with the score agonisingly close but the game somewhat ended on an anti-climax as Anthony Davis was sent to the free-throw line for the winning shot.

The crowd inside the United Center clearly didn’t like the ending, but Team LeBron once again walked away with the win over Team Giannis.

NBA Power Rankings: Does Boogie bring Golden State back to the top?