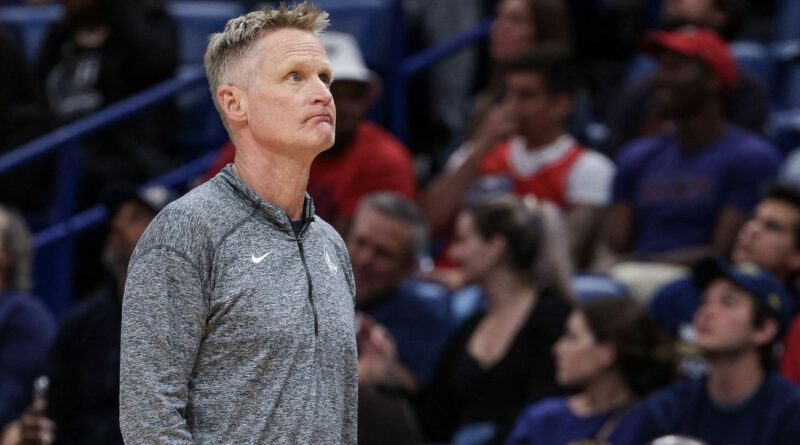 SAN FRANCISCO — In what Klay Thompson called a “road trip from hell,” the Golden State Warriors made history as the first defending champion to start the season 0-6 on the road.

But as they return home to San Francisco, they are maintaining a positive attitude. Warriors coach Steve Kerr noted the team’s 2-9 slump in February and March last season before they went on to win the title.

“There are times in the NBA season when things can go off the rails a little bit,” Kerr said after practice Sunday. “A big part of being a great team, being a solid organization, is just understanding how to work through that.”

The Warriors (3-7) lost at Phoenix on Oct. 25, and after a win at home over the Miami Heat two days later, they dropped five consecutive games at Charlotte, Detroit, Miami, Orlando and New Orleans. The Warriors are adamant that they could have won most of those games, nearly all of which came down to the final few minutes.

During the road trip, forward Draymond Green said the Warriors couldn’t fix all their problems right now and needed to zero in on the ones costing them games. Kerr reiterated that Sunday, saying boxing out and fouling were the two biggest areas of concern and that they would be emphasized during practice this week.

Golden State is also 24th in defensive rebounding — a category in which it ranked sixth last year.

“We just need to bring more of a sense of urgency,” Thompson said. “We had a long run last year, but 2022 is over. It’s time to kick into high gear and play that championship level of basketball that we’re used to. I fully expect us to do that.”

“We know how good we are in this building,” Thompson added. “So I think we’re going to be off to a fresh start.”

Kerr said he also plans to make changes to the rotation. After playing a season-high 38 minutes against the Pelicans, Jonathan Kuminga has earned a spot in the rotation, Kerr said. Before Friday’s game in New Orleans — which saw Kuminga start as the Warriors rested four of their five usual starters — Kuminga had played in just two of Golden State’s previous five games.

“I’m excited to play him,” Kerr said. “He’s got to just keep doing what he’s doing.”

Added Thompson: “I just want to see his energy at the highest level all the time. He’s such a great athlete. He can do so many things out there when he plays hard. He’s a great cutter. He’s a great defender. I’m excited for Jonathan. … As long as his effort’s there, he can contribute.”

Besides Kuminga getting more playing time, Kerr would not reveal what other rotation changes would be made or how Kuminga would get his minutes.

“Every single season for me, there are difficult decisions. You have to have hard conversations, but you just have to be honest,” Kerr said. “Guys go in and out of the rotation. … The key here is we have a group full of guys who are committed to each other and the team. Even though it’s frustrating individually at times, for a lot of them, their time will come. They are committed to each other, and when that happens, things tend to play out well.”