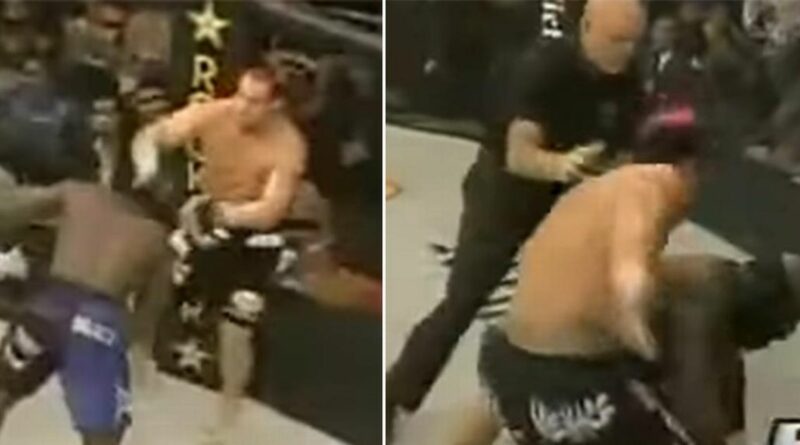 Kimbo Slice was given a brutal awakening after switching organised street fights to professional MMA after becoming a YouTube star during the early 2000s.

Kimbo, who sadly passed away from heart failure back in June of 2016, signed up for Elite XC back in 2007, taking on Bo Cantrell, Tank Abbott and James Thompson in warm-up bouts following an exhibition win over Ray Mercer.

Having beaten Cantrell, Abbott and Thompson by TKO, he stepped up his opposition by facing former UFC star Seth Petruzelli on a card that included Andrei Arlovski and Gina Carano.

Petruzelli was expecting to fight Aaron Rosa on the prelims of the EliteXC event, but would end up causing a huge shock to a reported TV audience of more than four million people.

Kimbo, who had been due to fight Ken Shamrock until just hours before the bout, was handed the largely unknown opponent, and Petruzelli was booed by the crowd during Jimmy Lennon Jr.’s introduction.

The favourite was then called the "undefeated, heavy-handed phenom" by Lennon Jr, with referee Troy Waugh then calling for both men to give the "millions of viewers" the fight they want.

With EliteXC promoter Gary Shaw once calling Kimbo "The Michael Jordan of MMA" – their plans would be stopped in their tracks within just seconds of the bout.

Should Kimbo Slice have had a better MMA career? Tell us in the comments section

Slice took the middle of the ring and and lunged towards his cautious opponent, before being caught by a speculative jab that sent him tumbling onto all fours.

A surprised Petruzelli proceeded to hammer his fallen foe, who then turned to face him, before the referee had seen enough and called the event to a halt.

“The most incredible victory in the history of mixed martial arts!” shouted commentator Gus Johnson.

Kimbo said when asked if he was embarrassed or upset about the loss: "Nah, none of the above.

"It comes with the fight, it comes with the territory. Like I always said from the beginning and I'll say it again. I'm a fighter, and thats what I continue to do and I give 110% in it.

"If a guy catches me with a good one, that's cool."

While EliteXC would never host another event, Kimbo went on to fight twice under the UFC banner before turning to Bellator ahead of his untimely death at the age of 42.

Goran Dragic undergoes knee surgery and out until All-Star break