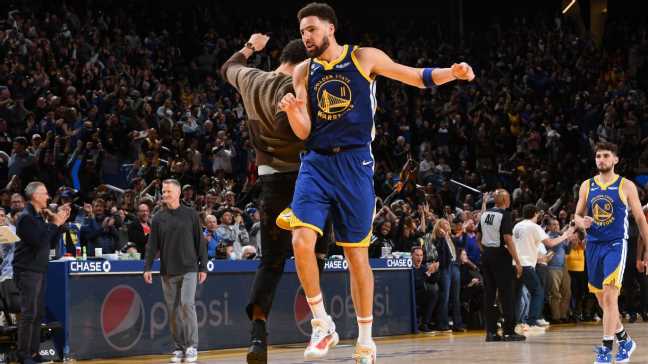 SAN FRANCISCO — Kevon Looney tipped in the game winner on his own offensive rebound as the final buzzer sounded in the second overtime after missing moments before, Klay Thompson scored a season-best 54 points, and the Golden State Warriors held off the Atlanta Hawks 143-141 on Monday night.

Trae Young tied the score on a layup with 8.2 seconds remaining before the Warriors’ final chance. Young made four crucial free throws late in the first OT and finished with 30 points and 14 assists.

Looney had a career-high 20 rebounds (10 offensive) to go with 14 points and five assists. Draymond Green made his only 3-point attempt of the game with 43.8 seconds left in the second OT and finished with 13 rebounds and 11 assists.

Thompson shot 21-for-39 and his 10 3-pointers matched a season high — and his 54 points were six off his career-best scoring outing of 60 accomplished in three quarters on Dec. 5, 2016. He hit a go-ahead 3 with 18 seconds left in the first overtime after his tying 3 with 1:55 to go in the initial extra period.

Donte DiVincenzo corralled a crucial offensive rebound, then knocked down a tying 3-pointer with 0.6 seconds remaining in regulation to send the game into OT after Thompson and Jordan Poole had each missed from long range during the same sequence.

DiVincenzo grabbed another key rebound with 1:23 left in the first extra period to help the undermanned defending champions run their season-best winning streak to five games with a sixth straight home victory.

John Collins scored 21 of his 25 points after halftime and made 13 assists as the Hawks roared back after trailing by as many as 21 in the first half. Dejounte Murray also scored 25 to go with 10 rebounds and 7 assists.

All five Atlanta starters scored in double figures, as did Bogdan Bogdanovic, with 21 off the bench.

De’Andre Hunter returned from a three-game absence with a sprained left ankle to scored 17 points for the Hawks, who lost their fourth straight. Atlanta rallied in the third to tie the game at 95 heading into the fourth.

Thompson had 22 points on 9-for-14 shooting with four 3-pointers by halftime. His fourth 3 of the night forced Hawks coach Nate McMillan into a timeout at the 4:30 mark of the first quarter.

This time, the Hawks made the adjustments: They surrendered a season-best 47 points to LeBron James on his 38th birthday in a 130-121 home loss Friday night.

Golden State is 17-2 at Chase Center and 5-0 on its current eight-game homestand that matches the longest in franchise history.

DiVincenzo took on the defensive duties against Young, who hit four of his first six shots with two 3s.

With Doc Rivers out, Clippers could consider these four coaching candidates 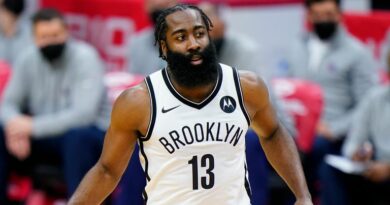 Source: LeBron’s No. 6 to wait due to Nike issue