There’s no doubt Golden State Warriors All-Star guard Klay Thompson will be a top target across the league’s landscape when he hits free agency next summer. However, teams may need to start planning to look elsewhere for help.

According to a report from Kevin O’Connor of The Ringer, the sharpshooter is widely expected to re-sign with the Warriors. From O’Connor:

“Thompson will turn 29 this season and will hit unrestricted free agency for the first time in his career next summer. With upward of a decade more of professional hoops remaining, Thompson could decide to wear a different uniform. And were he to hit free agency, it would be at a time when his particular skill set has never been more valued by this league. Every single team has shooting at the top of its wish list. The Lakers would definitely love a shot at pairing him with LeBron James. But the expectation across the league is that Thompson will re-sign with Golden State. Executives I’ve spoken with said they would be shocked if Thompson left the Warriors.”

Thompson certainly doesn’t sound like a player eager to leave his current situation, as he takes major pride in the role that he has played in building the Warriors into the budding dynasty that they have become.

“I’ve been to the mountaintop,” Thompson said in a 1-on-1 sitdown with Shams Charania of The Athletic last month, via NBC Sports Bay Area. “I know what it feels like to win and win with some of your best friends. And that’s why it would be hard for me to leave just because I’ve put so much blood, sweat and tears in this building and with this franchise. I’ve had my ups and downs but I couldn’t imagine myself being somewhere else.”

While Thompson is happy with the Warriors now, he knows that things could be different down the line.

“It’s easy for me to say that now, but with time, things change,” Thompson said. “It’s hard for me to envision what goes on in nine months.”

Thompson has previously stated that he would like to play his entire career in a Warriors uniform.

“I’ve said it many times before: I would like to be a Warrior for life,” Thompson said in August, via Mark Medina of the Bay Area News Group. “Contract negotiations are way down the line. But I think we all have the same interest. I would love to be here for the rest of my career… I’m going to be a free agent in 2019. Number one on my list would obviously be to stay with the Warriors.”

Time will tell if Thompson actually re-signs with the defending champs. But for now, his main focus is winning a third straight NBA title. 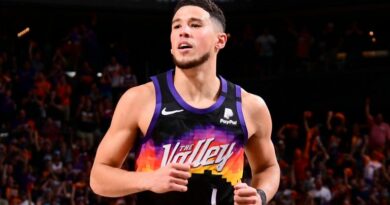