While there’s mounting speculation as to what the Knicks will do when free agency opens Sunday, guard Damyean Dotson doesn’t believe New York needs to make big moves.

Dotson told the New York Post in a phone interview Wednesday that he feels the Knicks will be strong enough with the young core they already have. Dotson, New York’s second-round pick in 2017, is coming off a season in which he played with a torn labrum. He had shoulder surgery in mid-May, but feels he will be ready to make an impact in his third season with the Knicks.

“I’m a young guy still,” Dotson said. “We have a full team of young guys. My teammates Allonzo (Trier), Kev (Kevin Knox) Mitchell (Robinson), RJ (Barrett), we’re rising stars. We can build together and one day become a great team if we work hard keep listening to coach (David Fizdale). All the guys played last year got experience.”

Another difference Dotson pointed to is the addition of RJ Barrett, who the Knicks selected with the No. 3 overall pick out of this year’s draft. 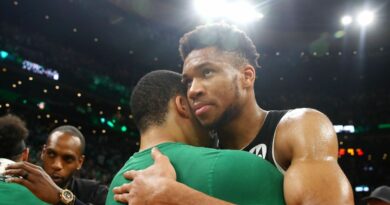