After a surprisingly good regular season but a disappointing first-round trouncing by the Hawks, the Knicks are looking to retool their roster heading into the 2021-22 season — and that could come by way of Cavaliers guard Collin Sexton.

The Athletic’s Shams Charania reports that the Knicks are the “most aggressive” trade suitor for Sexton. The Athletic’s Jason Lloyd recently reported that Sexton is, in fact, “very available.”

Sexton is coming off his best offensive season in the Association, averaging 24 points per game on over 47 percent shooting from the floor, and would certainly fit the Knicks’ need for good guard play and help the lack of offensive production in their rotation.

The Knicks have been looking for a long-term answer at starting point guard seemingly since Methuselah walked the Earth. New York got a promising effort from Derrick Rose after trading for him this past season, but Rose is a free agent.

That leaves New York with Immanuel Quickley, Frank Ntilikina and incoming Argentinian Euro hoops star Luca Vildoza as potential options to start next season. That, of course, is not the most encouraging group, and Sexton would be a clear and obvious upgrade over the pack.

Sexton enters the 2021-22 season with one year left on his rookie deal, and it’s unlikely that Cleveland would offer him a rookie max deal. The Knicks have also been rumored to be doing “homework” on star Trail Blazers guard Damian Lillard.

Armed with ample trade capital in the coming years and a few young assets they could part with, the Knicks do have the ability to pull off a trade of this nature. 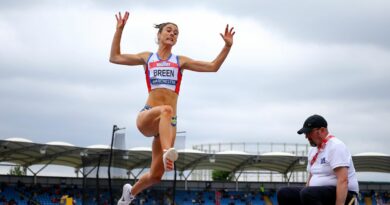 Paralympian "speechless" after briefs called "too short and inappropriate"