Boston Celtics point guard Kyrie Irving has been fined $25,000 by the NBA for throwing a basketball into the stands after a game.

The fine was handed down Tuesday by league discipline executive Kiki VanDeWeghe.

The ball-throwing incident occurred at the end of the Celtics’ 115-107 loss to the Denver Nuggets on Monday night.

Irving was unhappy that Nuggets point guard Jamal Murray took a three-point-shot with the clock winding down, when Denver already had the game won.

Murray, who scored 48 points in the game, said he was trying to reach 50.

Irving remains defiant about the incident and, quoted on ESPN, he said: “From a competition and competitive standpoint, I think it absolutely deserved to go in the stands still.

“There’s a tradition and a respect within the league, as well as in any basketball game.

“Obviously you’ve won the game, you have it sealed, you’ve had a great game, game of your life, and you do something like that.

“We’ll see him again though.” 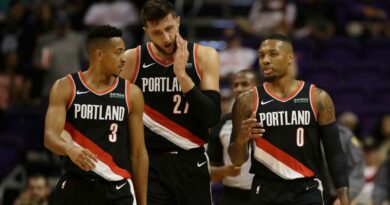