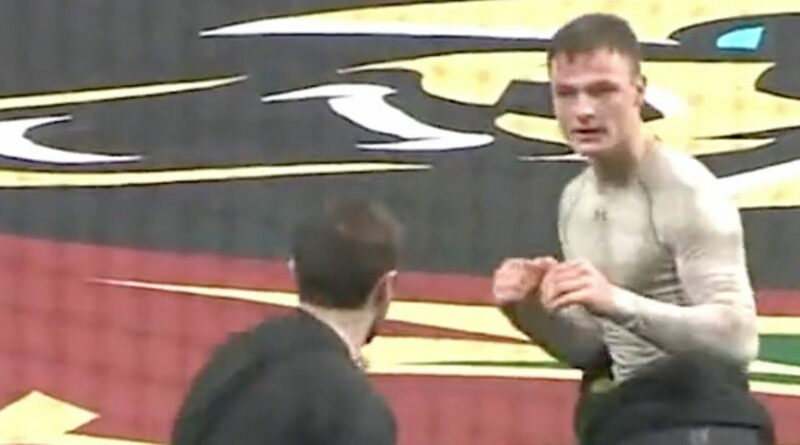 Two professional Lacrosse players were seen removing their huge protective padding before taking part in a brutal fist fight in the United States.

The fight took place during the National Lacrosse League game between Roaches Knighthawks and Albany Firehawks, as the pair both landed blows in the heated on-pitch encounter.

It seemed as if both players were more than keen to fight it out equally, as the pair were both seen removing their protective padding before exchanging blows to the dismay of the match referee.

The fight was reportedly between Albany reserve goalie Ethan Woods and Rochester man Ryan Hartley as they battled it out in one of the arena’s penalty boxes.

After some early grappling and shirt pulling, Woods was the man who landed the first real blow, as he caught Hartley with an uppercut.

The Rochester player replied with two quick right-handers into his Albany rival, before he tackled him to the ground where match officials quickly flew over to break up the bout.

The NLL match was televised live on TSN and the broadcaster showcased every second of the near enough amateur boxing fight, which was clearly enjoyed by the TV commentators.

Is this one of worst fights in sports this year? Let us know your thoughts in the comments section below.

As the battling pair began to face off one commentator commented: “Oh my goodness, look at this.”

To which his partner replied: “Oh… wow. Here we go. They’ve got to charge extra for this!”

After the brawl was eventually broken up both players – and sides – were dealt penalties from the match referee, as Woods and Hartley were removed from the game.

Following the hysteria the game did finally resume, as Rochester eased to a 18-7 victory over their NSL rivals.

Australians Fall Madly In Love With Brook Lopez, As Is Natural