LAKE BUENA VISTA, Fla. — The NBA’s best player had not played a game in more than four months. But Los Angeles Lakers star LeBron James was not here to speak about the games he missed. Nor did he seem inclined to say anything about the Lakers’ 108-104 loss to the Dallas Mavericks in a scrimmage Sunday.

Instead, James sought to show once again that he is more than an athlete.

"I want to continue to shed light on justice for Breonna Taylor," James said. "To her family and everything that is going on and that situation."

That situation has not been resolved in months. Three Louisville police officers killed Taylor, an unarmed 26-year-old Black woman, in her home on March 13 after wrongfully suspecting that she was working as a drug and money launderer on behalf of her ex-boyfriend. None of the three officers — Jonathan Mattingly, Brett Hankison and Myles Cosgrove — have been charged, though the Louisville Metro Police Department fired Hankison in late June.

James grew up in a single-parent household and moved multiple times. Even as an NBA star, he has heard racial taunts and threats. Someone one vandalized James’ house with racist graffiti. As James said, "you’re racially profiled by the time you’re out of the womb." James called it "heartbreaking" when he saw a video on Wednesday of a Black man getting arrested at a retail store despite having the receipt that showed he purchased a bike for his son.

Lakers coach Frank Vogel may not truly understand what it is to be Black in America, either. But since Floyd’s murder, Vogel has had talks with James about these racist experiences through the team’s frequent Zoom calls and in private conversations. Vogel has become increasingly grateful that "no one’s been more vocal on raising awareness for these topics than LeBron James."

"We all have to get more comfortable talking about racism. It’s a human rights thing that is too much of a problem in our country, it always has been," Vogel said. "With these conversations, I want to personally recognize that I’ve lived a life of white privilege. So I don’t experience the same things that people of color have experienced throughout their life, and with these conversations over these past few weeks, couple of months, I’ve heard story after story after story of incidents where friends of mine were profiled and treated unfairly because of the color of their skin. And it’s not right. And hopefully we’ve reached a tipping point that change is coming."

Will that change come? James conceded that "justice for Breonna Taylor is number one on all of our list right now because we know the story and know how crazy what went on in that situation and how horrific it is." James then suggested it will take more than a vote to ensure Trump is not re-elected to fully eradicate racism. He also suggested that all people have to become more comfortable with having direct conversations, even if they disagree on these topics.

"I never shied away from being who I am and speaking about things that not only affects me, hits home for me, but also affects my community and affects Black people. We’ve been going through it a lot."

James finally reached his breaking point. He said his piece for nearly 12½ minutes before concluding with one final message.

"We end this with justice for Breonna Taylor," James said before walking away, hopeful that the path he forged will help lead to that change. 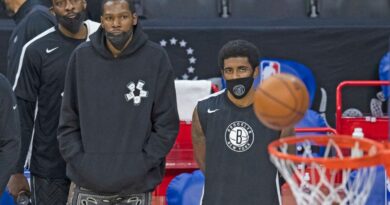 We should have had an Eastern conference battle last night with Nets-Sixers, but got ripped off instead