After a 2-5 start in which LeBron James had to remind himself to be patient with his new team, the Los Angeles Lakers have won six of their last seven games, including a 126-117 win over the Portland Trail Blazers on Wednesday night. Just as they’re starting to play well, however, the Lakers will be without the services of veteran point guard Rajon Rondo for an extended period of time.

Lakers coach Luke Walton told reporters after the game that Rondo had broken his hand, and that he would be out “a few weeks.” Lakers reporter Mike Trudell later revealed that Rondo had injured the third metatarsal in his right hand.

“He hit his hand on the floor when he went to steal that ball,” Walton said, via ESPN’s Ohm Youngmisuk. “They [the medical staff] are getting all the details. I just know he will be out for a few weeks.”

In his first season with the Lakers, Rondo is averaging 9.3 points, 6.8 assists and 4.8 rebounds in mostly a reserve role. After rough stops in Dallas and Chicago, Rondo helped lead the New Orleans Pelicans to a playoff berth and a first-round sweep of the Portland Trail Blazers last season.

Rondo had been commanding the second unit, and his injury opens up more minutes for starting point guard Lonzo Ball, along with promising young reserve Josh Hart. It could also allow Brandon Ingram to play more of a point forward role, which he performed well in toward the end of last season, while spending more time on the court with the reserves. 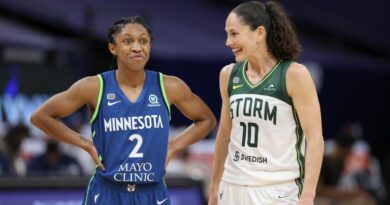 Superhero by name, superhero by game: The WNBA players doing a bad job of hiding their alter egos