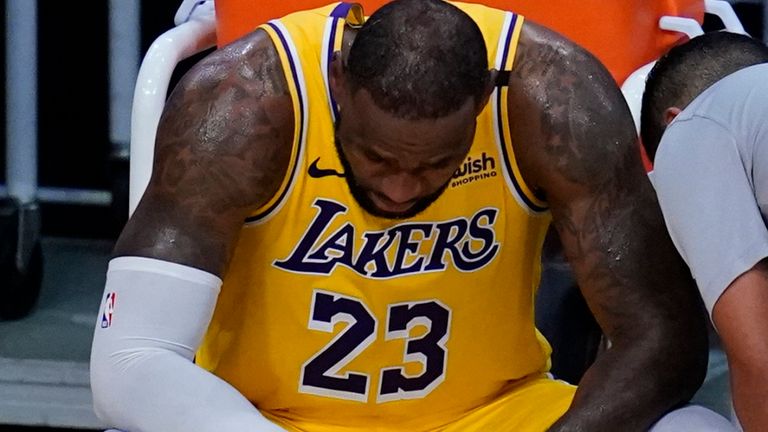 LeBron James has never been eliminated in the first round of the playoffs in his long and storied NBA career, but a Game 6 defeat to the Phoenix Suns means his season is over.

The defending champions have been fighting an uphill battle since their defeat in Game 1 of the series, but in truth, the Lakers’ struggles began much earlier in the season.

The tight turnaround from last season’s title-winning exertions in the NBA Bubble in Orlando, which finished on October 11, when they beat Miami to lift the Larry O’Brien trophy, to the new campaign tipping off on December 16 left the Lakers with little time to rest and get fully healthy.

That has meant a season where the team has been constantly fighting injury and LeBron admitted as much after the game.

The 36-year-old also reserved special praise for Devin Booker whose 47-point performance confirmed the Lakers’ season is now over, and fielded questions about the future of the team, and his plans for the summer with the US team heading to the Olympics.

Here is every word from his post-game press conference.

On the Lakers’ health

“The season started so fast after leaving the bubble obviously. I think I was talking to Wes(ley Matthews) in the locker room. The one thing that bothers me more than anything is we never got an opportunity to see our team at full strength because of injury, because of COVID, or because of something going on with our ball club this year.

“We could never fully get into a rhythm and never see the full potential of what we were capable of. We obviously fell short of our goal but we tried to do everything to be as good as we could be under the circumstances.

“I also want to shout out Phoenix too. Monty Williams, Book and that team were excellent throughout the series, all of them, so much respect.”

On getting some much-needed rest 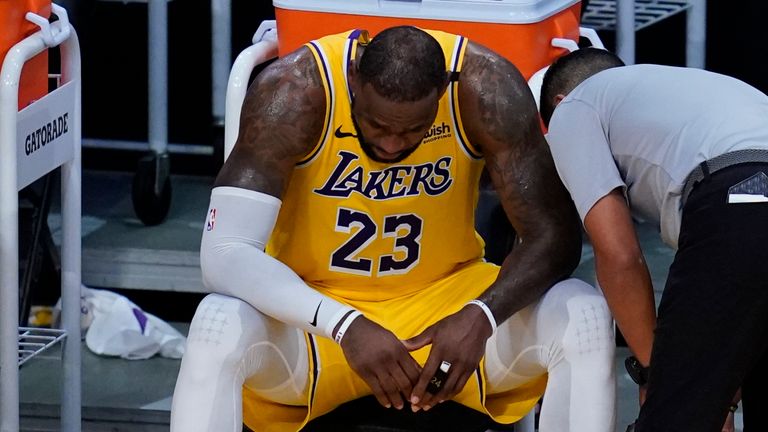 “I can get three months, to recalibrate, get my ankle back to 100 per cent. Everything else feels extremely well. My ankle is the only thing that’s bothering me, in the later stages of the season. It never got fully back [to where it was] before the injury but I was just happy I was able to get out there and help our team win.”

“I tore my groin my first season with the Lakers and we didn’t make it. Every season is different, every challenge is different and to be able to put myself where I can even have accomplishments to either be broken or continue with is all due to the grace of the man above and putting a lot of hard work in, having great team-mates, great coaching staff, things of that nature so if there’s a record, or if there’s not, they’re always meant to be broken in that fashion.

LeBron James has been eliminated from the NBA playoffs in the first round for the very first time in his career. pic.twitter.com/Uoz5x3mnOu

“It doesn’t matter to me not making it out of the first round, what matters to me is getting this team back healthy. Me not being able to be at my fullest strength throughout this series is my main focus. Time to re-adjust and think what the off-season has.”

On the mental drain of the last 18 months

“Every team has to deal with it obviously but us and Miami, going the long haul in the bubble and then coming right back short notice to this season, it’s been very draining. I commit, my team-mates committed and the coaching staff to being ready to go when the time was called and giving everything we had up until this moment. But ‘may the better man win’, and the Suns were the better man in this series.” 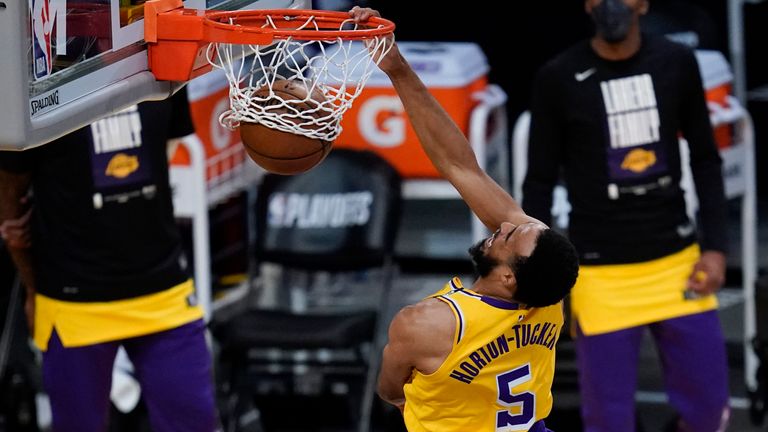 “Rob (Pelinka) has done such a great job of constructing this team that he’ll continue to do that. I will have some input, he always asks for my input and for AD’s input.

“Every day we want to continue to get better. I trust Rob, I trust Kurt (Rambis), I trust everyone upstairs who does their diligence and stuff of this nature. Obviously number one thing for us is getting AD healthy because it doesn’t matter what changes we make, [if] we get the big fella healthy and he’s back to what he was before the injury and get my ankle back right, which I – 1000 per cent – already know I will be 100 per cent with my ankle when we get back for the season in October. That will put us with the best possible chance to be successful next year.

“Rob will do his due diligence and construct this team to get it where it needs to be to compete for a championship once again.”

On Devin Booker and the new wave of superstars 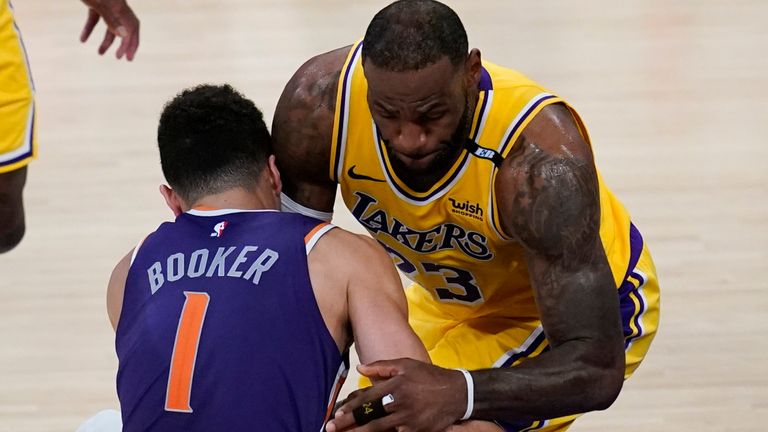 “I love everything about D-Book. I’ve had numerous conversations with him in the past. He continues to make the jump. When you want to be great in this league, as he said, and as Kobe told him to be legendary, when you want to be legendary you’ve got to improve, not only your game but you as a man in everything both on and off the floor. All the conversations I’ve had over the years, I could tell he’s soaked them up and used them to his advantage.

“Everyone sees what he’s able to do on the floor right now, but his maturity as a young man is what I’m most impressed about. I love everything about Book, that’s the post-game interaction.

“Secondly, I don’t need motivation from anybody in this league. I motivate myself. I’m motivated by my kids, my family and my love of this game but take nothing away from it, there’s some young guns in this game: Book, Donovan Mitchell, Luka, Ja Morant… so many guys that are 22 or 23-and-under, who are flat out special. I’m just naming a few, Jayson Tatum, let me not forget about him, how special he is.

“Those guys are great and the game is always going to be in great hands with guys like that, but my motivation doesn’t come from that, my motivation comes from my kids, my family, my ‘I Promise’ school back home that I get an opportunity to see. Today was their last day of school, so that was motivating to me, things of that nature, so I’m past the motivation stage of the younger group.”

On how the league handled everything about the pandemic

“The one thing that I’m happy about is to see fans back in our building. That’s the number one thing that I’m happy about and excited about. Obviously we’ve had a couple of instances over the past couple of weeks, or the last week, with some fans taking it a little bit too extra, but at the end of the day fans being back in the building is a beautiful thing to see, so you commend the PA, you commend the league, Adam Silver and his crew on figuring out a way to withstand the pandemic, to withstand it and the players committing to it. “It’s been tough. It’s been tough on all of us getting tested two or three times a day and all times of the hour, throughout the day but goes committed to it, and guys were happy to be back on the floor and doing it for the love of the game, doing it for your team-mates, doing it for your family and also just having the fans back in the building. Hopefully we’ve got this thing under wraps, but the league has done a great job of withstanding the tide and hopefully we continue to keep it going.”

On summer plans, Space Jam 2 and the Olympics

“I think I’m going to play for the Toons squad this summer, instead of the Olympics. That’s my focus on, trying to beat the Monsters or the Goon Squad, as we call them now.

“Didn’t have much success versus Suns so now I am gearing my attention to the Goons squad here during July, mid-July. I’m going to let the ankle rest for about a month, then I’m going to gear up with Lola, Taz, Granny, Bugs and the rest of the crew so hopefully see you all at the match.”