In his best game since arriving in Los Angeles in the summer, James added 10 rebounds and nine assists to his 44-point haul as the Lakers defeated the Blazers 126-117.

James reached 31,420 career points with an ‘And 1’ basket and free throw in the fourth quarter to pass Chamberlain. 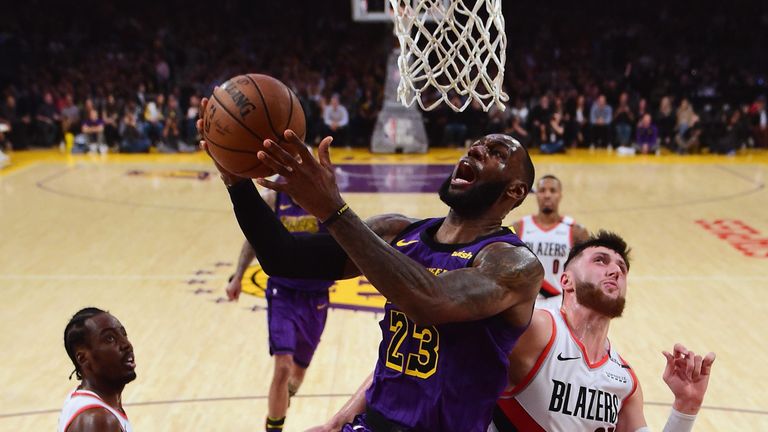 Speaking in the locker room after the game, James said: “Anytime my name is mentioned with some of the greats who have played this game, I’ll always think back to my hometown, how far I’ve come.

“Knowing where I’ve come from and knowing how hard it was to get to this point… I give it all to the man above for giving me God-given abilities.

Congrats to @KingJames of the @Lakers for moving up to 5th on the NBA’s ALL-TIME SCORING list! #LakeShow #ThisIsWhyWePlay pic.twitter.com/jUoPKfGRAv

“I’m taking full advantage of them and then my coaching staff and team-mates throughout my 16 years so far have got me to this point.”

Click the video at the top of the page to watch LeBron’s 44-point performance, including the play that took him into fifth place on the NBA’s all-time scoring list

Rangers cannot afford any more slip-ups if they are to catch Celtic, says Stevie Smith
We and our partners use cookies on this site to improve our service, perform analytics, personalize advertising, measure advertising performance, and remember website preferences.Ok