Home » NBA » LeBron on uncalled travel: ‘Had a malfunction’

SALT LAKE CITY — LeBron James broke a personal seven-game road losing streak to the Utah Jazz, dating back to December 2010, in the Los Angeles Lakers’ 121-96 win Wednesday, but there was one sequence he would like to get back.

As James was bringing the ball past half court in the first quarter, he picked up his dribble and proceeded to take 3½ steps — making it from the “A” to the “H” of Utah’s midcourt signage — before putting the ball on the floor again, with no travel call made by the official.

“It was the worst thing, probably one of the worst things I’ve ever done in my career,” James said after the game, essentially admitting his final line of 20 points, 12 assists and just one turnover should have included a second turnover. “I didn’t realize I did it until halftime. One of my coaches showed me.”

Jazz forward Bojan Bogdanovic didn’t take quite as long to recognize the miscue, signaling to referee Jacyn Goble as soon as it happened.

James said he was distracted by a collision involving Kentavious Caldwell-Pope and Donovan Mitchell and absent-mindedly kept shuffling his feet as he checked it out.

“I think at the same time, I was watching the underneath play, and KCP and Donovan got into it. KCP started to run, and Donovan bumped into him, he fell on the ground,” James said. “I think I was ready to pass the ball, and my brain just kind of just, I had a malfunction. I really had a malfunction.”

James had fun with a fan heckling him about the play in the third quarter by heckling himself right back.

“That’s one of the worst ones I’ve ever done in my life,” he could be heard saying to the fan on the Spectrum SportsNet broadcast of the game.

“I was wondering where I was when it happened. I’m like, ‘When the hell did this happen?’ So, yeah, I didn’t catch it,” Green said. “But it was funny to see after the game.”

James, who has publicly critiqued NBA officiating several times this season, acknowledged he was the beneficiary of a no-call this time around.

“I feel bad for the refs on that one because they’ll probably get a write-up on that or something,” James said. “That was pretty bad.” 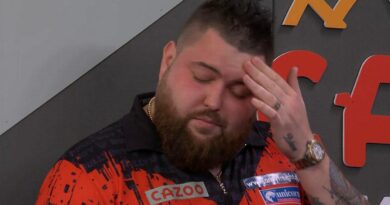 Hawks eyeing free agents from ‘Kevin Durant on down’ this offseason, report says

‘NBA 2K20’ release date, cost, new features, editions: A guide to everything you need to know