LeBron James inspired the Lakers in their Game 3 victory over Trail Blazers in the teams’ Western Conference first-round playoff series Saturday. He also made some NBA history.

James erupted for 38 points, 12 rebounds and eight assists as top-seeded LA took a 2-1 series lead over eighth-seeded Portland 116-108. The 35-year-old James became the oldest player to reach both 38 points and eight assists in a playoff game, surpassing Michael Jordan (34 in 1997), per STATS.

James also moved to second on the all-time playoff wins list wins with 158, leapfrogging Tim Duncan and getting another step closer to Derek Fisher (161). The three-time NBA champion climbed up to third on the all-time list for playoff 3-pointers made (375), as well.

“It’s always surreal for me when my name is associated with any of the greats, and obviously we know how great Tim Duncan was in this league, with that franchise,” James said. “I had my battles with him, also was a teammate with him in the Olympics and just seeing what he was able to accomplish not only in the regular season but more importantly in the postseason.

“Basically, he lived in the postseason; that was his address. For me to be linked with the Big Fundamental, it means a lot, not only to myself but my hometown and whoever has been following my career.”

Anthony Davis contributed his own double-double (29 points, 11 rebounds) as the Lakers benefited from a 40-point third quarter to fight off the eighth-seeded Blazers in the Orlando bubble.

While the Lakers won, they were far from convincing at the free throw line. They were just 65.1 percent from the stripe compared to Portland’s 94.7 percent. Davis — who missed four of his first five attempts — was 7 of 14 for the game. James was 12 of 17. 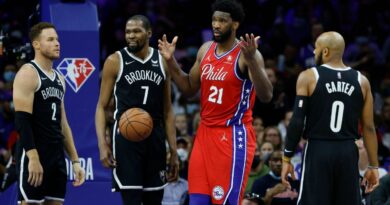 No point guards, some problems: What to expect from Nets, Sixers after two games 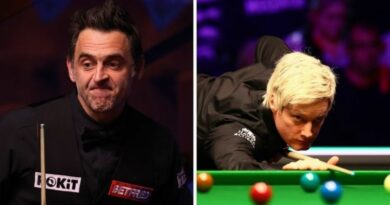