Home » NBA » Lessons from the Nets’ controversy-filled season: Is the Superteam Era over? 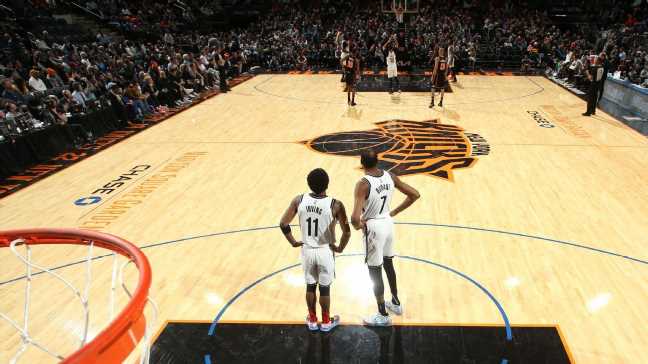 KYRIE IRVING’S OPENING act in Brooklyn was marred only by slick footing. It was the final possession of his first regular-season game — Oct. 23, 2019 — against the Minnesota Timberwolves. With 50 points already in the bank and the crowd roaring in anticipation, Irving dribbled opposite Josh Okogie with the game hanging in the balance, before slipping and performing an aerial cartwheel, falling but maintaining his dribble. He immediately popped back up and nearly drained an off-balance winning fadeaway at the buzzer.

The Nets lost the season opener, but electricity coursed through Barclays Center. Brooklyn had its first bona fide star in his prime suiting up for the Nets, one who would record point totals of 50, 39, 37 and 33 over his first 11 games before being sidelined by a shoulder impingement.

Yet talent comes with cost, especially with Irving. League sources say executives, coaches and players who were present during Irving’s time in Cleveland and Boston shared with the Nets negative intel — his unresponsiveness and truculence with coaches, his lack of self-awareness with teammates, his constant defiance of offensive game plans, his disinterest in playing off the ball. But the Nets, multiple sources say, knew that bringing Irving aboard was the cost of doing business: No Irving, No Kevin Durant.

To be sure, the Nets would be acquiring an otherworldly talent to pair with Durant. For all of Irving’s fickle behavior, his production, shot creation and finishing ability have been among the league’s best (11th in points per chance among 40 players with at least 7,500 shot attempts since 2013-14, when Second Spectrum began tracking).

But the Nets team he and Durant were joining was a paragon of cohesion — a team of castoffs, lower draft picks and reclamation projects who had overachieved and embraced an effort to build from the ground up.

Over the next year, several of the linchpins of that culture would be dealt to acquire James Harden to form a superteam.

By the time Harden grumbled his way out of Brooklyn, as he had into Brooklyn, the vibe at the facility in Sunset Park was vastly different — and the league took notice. Several top league executives assert that devising a strategy around chasing big-name stars doesn’t hold the same appeal it once did. They’ve watched the likes of the Celtics in the Kyrie Era, and now the Brooklyn Nets, the Los Angeles Lakers and — for the time being — the LA Clippers believe they could absorb superstars into their existing structures, only to be underwhelmed by the results.

One unintended consequence of bringing in players like Durant and Irving is that an upstart core often hears a pointed message that management doesn’t entirely believe in what is being built, despite years of gospelizing the value of culture. As much as an organization might believe that arriving superstars will adapt to the team culture that preceded them, superstars often don’t adapt to cultures; they replace them.

“Assembling a superteam is something very, very few organizations can do,” one senior league executive says. “And we’re seeing that even fewer can actually pull it off because superstars aren’t enough — it has to be the right superstars in the right culture. What this current era of NBA basketball is showing us is that going all-in — whether it’s with cap space or all of your loot — to go acquire two or three of the top talented players in the league and having either underperforming infrastructure or a complete lack of roster depth, you’re doing nothing favorable for your organization.”

No team serves as a more compelling study than the Nets, who are still looking for a sustained breakout as they scrap for a playoff berth in the play-in tournament. The Lakers didn’t even get that far.

This postseason offers a referendum — is the era of the superteam over?

Joel Embiid is back to make everything work for the Sixers