Home » NBA » Lowe: How this bruising, exhausting Bucks-Nets series has led to Game 7 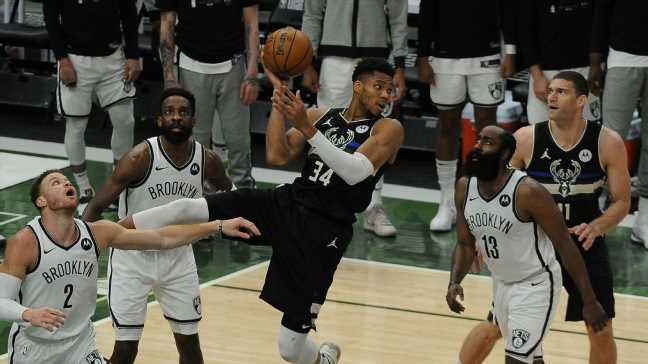 Postseason intensity and defense can squeeze some style out of the game. There is a different beauty in watching the world’s best players search, sometimes with visible desperation and sometimes with calm that is frankly unrelatable, for hard solutions when there are no easy ones.

Games 5 and 6 offered a whole lot of pressurized gutting-it-out from the Brooklyn Nets and Milwaukee Bucks. With Kyrie Irving out and James Harden almost immobile, Kevin Durant put forth a performance for the ages in Game 5 — playing every second and carrying the Nets to an improbable comeback.

That loss might have broken some teams. It did not break the Bucks. Their offense has come and gone, but their defense is unrelenting. Brooklyn playing with 1 1/2 superstars instead of three has obviously helped, but the Bucks have been a great defense for the entirety of the Mike Budenholzer era. They have not let their struggles on offense sap their will on the other end, and that is the biggest reason they live to see this game.

The journey here hasn’t been pretty for Milwaukee, or all that encouraging, but what an opportunity this is for them — and for Brooklyn. Joel Embiid is playing on an injured knee. The Hawks are young. Kawhi Leonard’s injury is a gut punch to the LA Clippers. Donovan Mitchell and Mike Conley are dealing with leg issues. Chris Paul is in the health and safety protocols. Whatever ugliness preceded this game is in the rearview. It doesn’t matter. Teams rarely get as many true shots at the ring as they think they will at the beginning. Each is precious.

Harden, meanwhile, pushed himself maybe beyond his comfort level with his hamstring in Game 6. The Nets finally rested Durant midway through the second quarter, and you could almost see Harden talking to himself: OK, time to see what I’ve got. He summoned whatever remains of his pick-and-roll game, using craft and guile to conjure a floater, one Bruce Brown triple, and a layup for Blake Griffin. It was damn near inspirational — a reminder that for all the crunch-time meltdowns and the messiness of his departure from the Houston Rockets, Harden is a freaking baller.