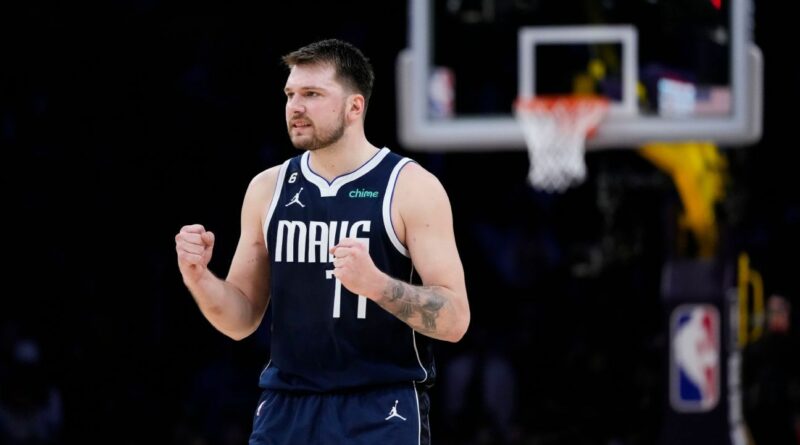 LOS ANGELES — For most of the fourth quarter, the Los Angeles Lakers prioritized forcing the ball out of Luka Doncic’s hands, sending a steady diet of double-teams at the MVP candidate and daring his Dallas Mavericks teammates to beat him.

The strategy worked, allowing the Lakers to rally from a deficit that had been as large as 19 points in the third quarter and take a three-point lead with seconds remaining. Doncic was scoreless for the first 11 minutes, 54 seconds of the fourth quarter — until he swished an overtime-forcing stepback 3 over Dennis Schroder’s single coverage.

“I was a little bit surprised,” Doncic said of not being double-teamed with the game on the line. “I don’t know why they didn’t. I thought they were going to foul, honestly, but I tried to get it up before they could foul.”

The Mavs eventually pulled out a 119-115 win in double-overtime in the Thursday night thriller at Crypto.com Arena. Doncic was spectacular throughout the game, finishing his 10th triple-double of the season with 35 points, 14 rebounds and 13 assists. He also delivered another game-tying 3 in the last minute of the first overtime period.

“Big-time players make big-time shots. It’s that simple,” said Lakers star LeBron James, who had 24 points, 16 rebounds and nine assists but was 0-of-6 from the floor in the overtime periods, including a potential game-winning reverse layup at the first OT buzzer that was blocked by Mavs big man Christian Wood.

Doncic, the league’s leading scorer, has made 10 game-tying or go-ahead 3-pointers in the final minute of the fourth quarter or overtime during his career, according to ESPN Stats & Information research. Portland’s Damian Lillard (14) is the only player who has made more since Doncic has been in the league.

Doncic’s clutch history is among the reasons that the Lakers’ decision not to send an extra defender at him on the final possession of regulation was so puzzling. The double-teams on Doncic had succeeded in disrupting Dallas’ rhythm. Doncic had five assists in the quarter, but the Mavs had scored only 16 points and committed six turnovers before his game-tying bucket.

“He did what Luka does,” said Lakers coach Darvin Ham. “I’m kicking myself in the butt. I need to coach a little better in that instance. We should’ve blitzed him — or at least forced him inside the 3-point line. Those situations, it’s kind of chaotic. A bunch of chatter. Everything’s going on. We’re trying to figure out the matchups. … So I’ll take the bullet for that. That’s on me. We have to be better defensively in those moments and force someone else to beat us.”

Doncic delivered yet another signature performance to lead Dallas to a victory that bumped the Mavs (24-19) back into fourth place in the Western Conference standings. It was his ninth 30-point triple-double of the season, three more than the rest of the NBA combined.

“If 77’s in the game, we have a great chance,” said Mavs shooting guard Tim Hardaway Jr., who had 22 points.

Doncic played a career-high 53 minutes, resting for a total of only eight seconds in the second half and overtime periods.

But he mustered the energy to make the two biggest shots of the night. It’s the second time in Doncic’s career that he has made two stepback 3s that tied the score or took the lead in the final minute of the fourth quarter or overtime in the same game. According to Second Spectrum, only two other players (James Harden and Victor Oladipo) have done that over the past 10 years.

Michael Jordan: When will The Last Dance episodes 9 and 10 be released?