LeBron James has led the charge against college sport’s governing body after it tightened the rules around agents, seemingly taking a shot at his agent Rich Paul.

Paul, who manages not just James but Ben Simmons, Draymond Green, Tristan Thompson and Anthony Davis to name a few, will be restricted from representing US college basketball players who seek to test the NBA Draft waters.

CBS Sports Jon Rothstein reported the details of the new rules, which require a bachelor’s degree, at least three years of National Basketball Player’s Association (NBPA) certification and an in-person exam at NCAA headquarters in Indianapolis.

It means students who sign with an uncertified agent like Paul would no longer be eligible for college.

The memo said: “Men’s basketball student-athletes who are considering careers in professional basketball but who may want to return to school are only permitted to accept permissible agent services from NCAA-certified agents with a signed agent agreement.

“It is important to remember that a men’s basketball student-athlete cannot enter into an agent agreement until after his team’s season has concluded, and the student-athlete has requested an evaluation from the NBA undergrad advisory committee.”

Rich Paul has plenty of star power behind him.Source:Getty Images

It’s a massive blow for agents like Paul who’s Klutch Sports Group has been high profile on the back of his association with James and many other star players.

But Paul is a polarising figure, having shaken up the industry with his aggressive management style and rapid rise.

Stream over 50 sports live & anytime on your TV or favourite device with KAYO SPORTS. The biggest Aussie sports and the best from overseas. Just $25/month. No lock-in contract. Get your 14 day free trial >

James was quick to lead the charge against the move with his long-time friend and agent directly effected.

James also posted an Instagram story with Paul’s Sports Illustrated cover, a tweet from New York Times writer Marc Stein on a shoe deal for now-Oklahoma City thunder player Darius Bazley, which guaranteed him $1 million while he was still in college and other agents taking shots at Paul, as well as the new regulations with the #StayWoke.

The move of Anthony Davis to the Lakers was a divisive move.Source:AFP

The world is so afraid of ground breakers….This is beyond sad & major B.S…..Keep shining @RichPaul4 ….This only makes you stronger….what you have built is unbelievable champ…. #TheRichPaulRule ….Shame on you NCAA

Imagine if people in their industries lobbied to make sure they couldn’t ply their crafts with some silly rule about needing a degree.

Requiring Rich Paul to get a BA is BS. https://t.co/nSvGP8Ug9b

I think it would be a bigger "Don't try to F with Rich Paul" than antitrust problem. Just sayin………… https://t.co/lhDdP3ImmT

What if a college gave Rich Paul an honorary degree

This probably isn’t the last we’ve heard of this.

The NCAA is no stranger to criticism with a long-time issue around payment of players.

College sport is a billion dollar business but players aren’t paid salaries, instead earning scholarships, while only the few elite star are able to move onto lucrative careers in professional sports.

Yet players like Zion Williamson and RJ Barrett earn stellar reputations they can’t cash in on until they make the NBA, despite being international known in college with strict criteria around college eligibility. 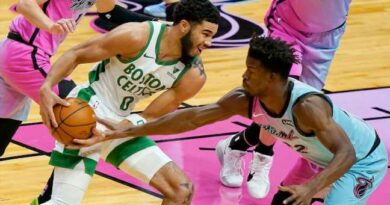 COVID-19 is making this the most unpredictable NBA season ever