Sir Mo Farah's wife sensed that something didn't add up about the star's identity in the lead up to their marriage over a decade ago.

Farah got engaged to Tania Nell in 2009 and the couple were married in 2010. It was during that time that Tania started asking questions about her husband-to-be's background.

"I first met Mo in school," she told BBC documentary, The Real Mo Farah. "He was always smiling, that's what stood out about Mo. Amongst the groups of grumpy teenagers, Mo was always happy go lucky. We were engaged by 2009 and it was during that period of time, sort of the year leading up to us being married, that I felt like there was lots of missing pieces to his story.

READ MORE: Legend Tiger Woods slams LIV rivals who have "turned their back" on golf

"Behind the smile there was something there and that's when I started to ask questions."

Nothing could have prepared Tania for what Farah said next.

Is Mo Farah Britain's greatest ever athlete? Let us know in the comments section below.

"I didn't know much about his parents at the time. I'd never seen them or heard him talk about them," she added. "It wasn't until – I think I'd worn him down, really, with all the questioning – that he eventually just said 'look, that's not how it happened.'"

Farah explained that it was difficult for him to finally tell Tania about his early life and how he reached the UK. "It was hard for me to tell her because I never really talk about it," he said. "It's more back of my mind and it has been for years."

Tania couldn't believe it. "He just sort of matter of factly told me, 'this is really what happened.' And I just…I was gobsmacked," she added.

Tania knew then what we know now – that Sir Mo was brought to the UK illegally as a child and forced to work as a domestic servant.

He was given the name Mohamed Farah – the moniker by which millions know him around the world – by the people who flew him over from Djibouti – the country he moved to from Somaliland at the age of eight or nine.

Farah, whose real name is Hussein Abdi Kahin, was flown over from Djibouti aged nine by a woman he did not know, and then made to care for another family's children.

When he arrived in the UK, the woman disposed of a piece of paper that had his relatives' contact details on and Farah was forced to do housework and childcare if he wanted to eat.

After he enrolled at school for the first time at Feltham Community College, he met a PE teacher, Alan Watkinson, who contacted social services after Farah had confided in him about his true identity.

It helped Sir Mo to be fostered by another Somali family, and soon after, he was granted British citizenship under the name Mohamed Farah. 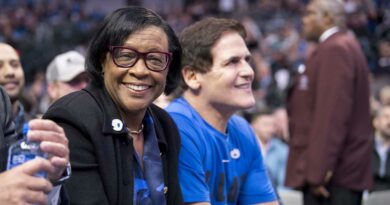 Meet Cynt Marshall: From one of Berkeley’s first Black cheerleaders to the first Black woman CEO in NBA

Denver Nuggets vs. Utah Jazz: Matchups, what to watch, predictions