PORTLAND — Jamal Murray opened Game 4 driving baseline when he was forced to take a fading behind-the-basket rainbow shot that floated over the backboard and dropped in.

And the guard sealed the game with six clutch free throws in the final 13.2 seconds to help the Denver Nuggets pull off their gutsiest victory of the season with a 116-112 win over the Portland Trail Blazers to even this best-of-seven series at 2-2.

Just over 40 hours after dropping Game 3 in a grueling four-overtime marathon that matched the longest in NBA playoff history, the Nuggets returned to the Moda Center determined not to let fatigue decide the outcome of their season. And they responded by stealing home-court advantage back as the series shifts to Denver for Game 5 on Tuesday.

“You go down 1-3, we all know how that story ends,” Denver coach Michael Malone said. “We never frayed, we stayed together and I can’t speak enough about the resiliency and toughness of our team.”

With their brains just as weary as their legs following Friday’s three-hour, 25-minute test of wills, the Nuggets rode Murray and Nikola Jokic to their biggest bounce-back of the season as the duo became only the second pair of teammates to record a triple-double and a 30-point game in back-to-back playoff games since the Lakers’ Magic Johnson and Kareem Abdul-Jabbar did so in 1980 against the Suns, according to Elias Sports Bureau.

Murray opened the game with his Larry Bird-like behind-the-basket rainbow trick shot and an emphatic first-quarter dunk over Enes Kanter complete with a scowl to set the tone for Denver. Murray scored 34 points for the second straight game to go with five rebounds and four assists.

And after logging 65 minutes in Game 3, Jokic delivered his second consecutive triple-double with 21 points, 12 rebounds and 11 assists despite being booed almost every time he touched the ball by Portland fans who feel he has been too physical with Kanter’s injured left shoulder.

“We just said to ourselves, if we win today, last game doesn’t really matter that much,” Jokic said. “Yes, we played four overtimes, it was exhausting. But we want to make the last game not really matter.”

Malone gave his team the day off from basketball on Saturday as he wanted his players to recharge physically and mentally from the 140-137, four-overtime loss on Friday. No film. No shots. Just visit with the training staff if needed.

“For me, I eat good, I watch TV show, I eat good again, sleep,” Jokic said. “And to be honest, I didn’t think about that game the whole day.”

The Nuggets got a scare with 47.9 seconds left when Jokic limped off to the bench after getting hit in the side of his right knee. Jokic said his body went numb but he returned at the end of the game and reported that he’s fine.

Most would’ve expected Jokic’s 7-foot, 285-pound body to go numb after playing the most playoff minutes by any NBA player since 1953. But the All-Star center responded with his fourth triple-double of the playoffs, the second most triple-doubles by a player in his first postseason behind Johnson’s five triple-doubles.

Jokic’s passing was on display when the game was on the line. He dished four consecutive assists for huge Denver baskets after the Blazers cut the Nuggets’ lead to one with 3:26 remaining.

And when Damian Lillard (28 points) and CJ McCollum (29 points) got the Blazers within two on three occasions in the final 20 seconds, Murray responded with a pair of free throws each time.

“Free throws [are] my thing,” said Murray, who is a career 87.9 percent free-throw shooter. “My Dad and I do a lot of training free throws, blindfolded. He’ll be talking to me just like the crowd is, put pressure on me. Take a 1,000 free throws in practice to make one or two. Tonight it ended up being six.”

In what is the first postseason for many of the young Nuggets, Denver lost Game 1 in the first round at home, Game 3 and Game 6 at San Antonio and each time bounced back with what was basically a must-win against the Spurs.

After the Nuggets’ biggest bounce back yet, guard Gary Harris was asked about the Nuggets’s resiliency.

“Everybody just learn that word right now?” Jokic, standing next to Harris in the locker room, asked.

No one questions the Nuggets’ fortitude after overcoming one of the most physically challenging circumstances for any team to face. Not since 1953 when the only other four-overtime playoff game was played has a team had to rebound from such a physically and mentally gut-wrenching loss.

“I really was confident because in close games this year, we’re 13-3, decided by three points or less,” Malone said. “We’re 12-1 in the second nights of a back-to-back, best record in the NBA.”

“To come in here and win this game [over] 36 hours after losing a four-overtime game speaks to just how tough we are.” 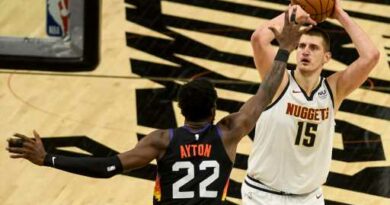 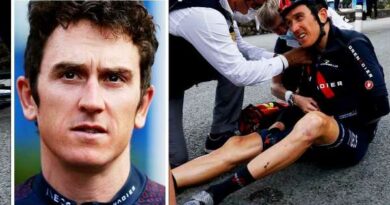 ‘What did I do to deserve this?’ Geraint Thomas opens up on ‘hardest time’ of his career