Finding the right matchup to exploit in NBA DFS tournaments can be the difference between winning big or going home with nothing. And Thursday’s main slate on DraftKings and FanDuel, which features four games and tips off at 7 p.m. ET, is offering contests with big-time prizes like the $425K Big Jam on DraftKings and the $400K Thursday NBA Shot on FanDuel. Whether it’s a forward who has a favorable matchup against a porous defense, or a center who’s capable of putting up a monster stat line, finding the right NBA DFS value picks is key. But before you lock in your NBA DFS lineups, you’ll want to see the top NBA DFS picks and lineups from Mike McClure. He’s a professional DFS player who has won almost $2 million in his career.

McClure is also a predictive data engineer at SportsLine who uses a powerful prediction model that simulates every minute of every game 10,000 times, taking factors like matchups, statistical trends and injuries into account. This allows him to find the best NBA DFS values and create optimal lineups that he shares only over at SportsLine. They’re a must-see for any NBA DFS player.

McClure is off to a blistering start, cashing his first five lineups on DraftKings to open the season, as well as producing multiple other optimal lineups that have led to huge returns for followers, including as much as 40x on FanDuel and 15x on DraftKings.

For Thursday’s slate, McClure is banking on Kings guard De’Aaron Fox at $8,600 on FanDuel and $7,600 on DraftKings. Fox has been filling the stat sheet as of late, averaging 22 points, four steals, 3.5 assists and three rebounds in his last two outings. And the second-year pro out of Kentucky enters Thursday having scored 35 or more points on DraftKings in eight of his last 11 games. Now, Fox gets a dream matchup against the Pistons, who’ve allowed 110 or more points in three straight contests. He’s a complete steal at this price point, so lock him in for Thursday’s slate.

Another pick he’s all over: Thunder forward Paul George ($9,700 on FanDuel, $9,800 on DraftKings), who’s averaging over 31 points per game in his last nine outings. DFS owners who have played George have seen some big rewards recently, including 45 or more points on DraftKings in nine of his last 12 outings. Lock him in as one of the top overall plays on Thursday.

McClure is also targeting a player capable of putting up big numbers who has a dream matchup on Thursday. The stars are aligning for him to return 40, even 50 points on both sites, and he comes at a lower price than you would expect. This pick could be the difference between winning your tournaments and cash games or going home with nothing.

So who is DFS pro Mike McClure putting in his optimal NBA DFS lineup Thursday? Visit SportsLine now to see the full NBA optimal tournament lineups from a professional DFS player who has almost $2 million in career winnings, and find out. 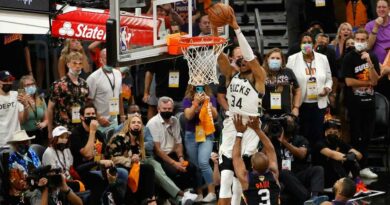 With elimination looming, can Chris Paul avoid Hall of Blunders for Game 5 push?