Anthony Davis aggravated a right heel contusion in the opening quarter of his team’s 111-108 loss to the Miami Heat on Friday night and Los Angeles Lakers coach Frank Vogel prefers to take a wait-and-see approach regarding the star forward’s availability for Game 6.

“Yeah, he is just battling through the heel,” Vogel said. “He was struggling to move a little bit but toughed it out. We’ll see how he feels tomorrow.”

Davis, meanwhile, stressed “I’ll be fine on Sunday,” when the teams face off again in Game 6 (live on Sky Sports Anena in the early hours of Monday morning, 12:30am) with the Lakers leading the best-of-seven series 3-2.

Davis suffered the injury in the waning moments of the first quarter, when he landed awkwardly on his right foot after going up for a rebound. He immediately limped toward the baseline and crumpled to the ground wincing in pain. 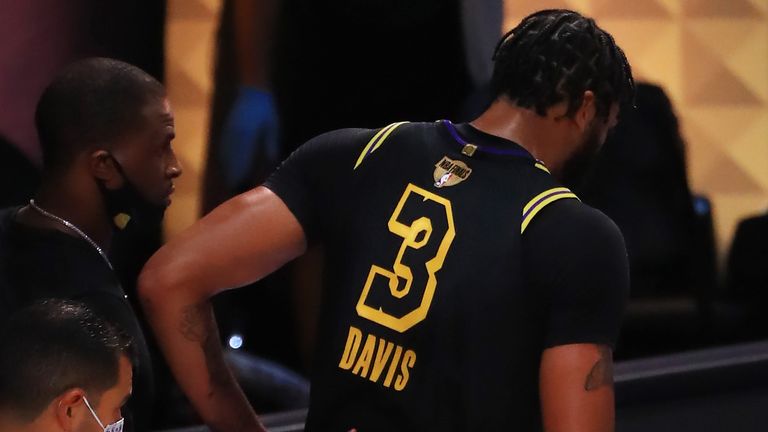 Davis headed back to the bench after Lakers athletic trainers took a look at the injured foot, and the team announced he would be available to return as the forward paced the sidelines trying to regain mobility in the injured area.

Davis said that Miami’s Andre Iguodala “kind of just stepped on” his right foot and “re-aggravated” it.

Davis never headed back to the locker room for Lakers athletic trainers to take a closer look. He left the game with 48.4 seconds remaining in the first quarter and re-entered in the second quarter at the 8:30 mark with his team trailing by eight points (38-30).

Despite the early injury, Davis still managed to play a team-high 42 minutes 13 seconds, scoring 28 points on 9-of-15 from the field to go with 12 rebounds.

“He is a warrior, man. Just him being there out there hobbled just brings a lot more confidence to myself and my team,” said LeBron James, who finished with a game-high 40 points, 13 rebounds and seven assists.

“We know the nicks, bumps and bruises he has played through throughout the whole season.

Marcus Rashford strikes late again to earn Manchester United another famous win in Paris
We and our partners use cookies on this site to improve our service, perform analytics, personalize advertising, measure advertising performance, and remember website preferences.Ok