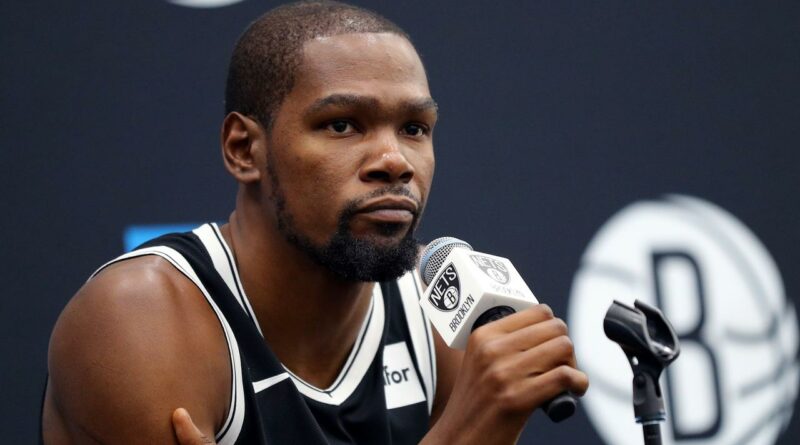 The fine was announced Friday by Byron Spruell, president of league operations for the NBA.

In his first public comments since February 13, Durant apologised on Thursday night for profane private messages sent to Friends actor and sports podcaster Michael Rapaport, who shared the DMs with the public on Wednesday (AEDT).

“I receive threats and disgusting messages DAILY, but never in my wildest dreams did I think

(Kevin Durant) would be among them,” Rapaport wrote on Twitter.

“The Snake himself is now threatening me, bringing up my wife and wants to fight. This is supposed to be America’s sweetheart right?

The Post has reported that the Nets have spoken at length with Durant about the incident.

After his mea culpa, Durant appears to have escaped any sort of suspension from either the Nets or the NBA.

“I’m sorry that people seen that language I used. That’s not really what I want people to see and hear from me,” Durant said.

“But hopefully, I can move past it and get back out there on the floor.”

The Post reported on Wednesday that not only was the NBA aware of the DMs and assessing them for an appropriate punishment, but also that the Nets had spoken with their star player regarding them. Coach Steve Nash confirmed as much before Friday’s victory over the Charlotte Hornets.

“Well, first of all, that was a private conversation with him and the other party,” Nash said. “We’ve talked about it internally. But we’ll keep all that stuff internal.”

Durant and Rapaport briefly had a professional relationship. At one point, Durant had even given the actor tickets to the NBA Finals while playing for the Warriors, but Rapaport complained about the location of the seats.

Durant has missed 21 straight games with a hamstring strain and hasn’t played since February 13.

He’s not expected to play in either game of the Nets’ upcoming back-to-back — Monday in Chicago or Tuesday against the rival Knicks.

Durant and Nash, however, both said on Thursday that he’s on the brink of being able to rejoin the line-up.

This article originally appeared in The New York Post and was reproduced with permission.

Comparing the NBA MVP finalists: Who has the edge?

Rondo to clear quarantine; no timetable for return